The best of Inishowen, Irish food – and the IFBA 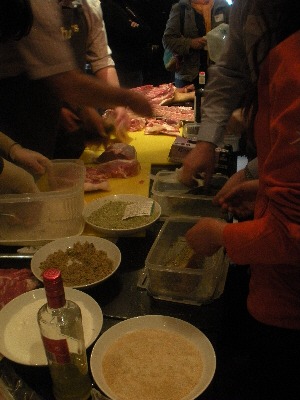 Curing your own at InishFood

We had no idea what we were getting ourselves into. A simple idea – organising an Irish Food Blogger Association dinner at Harry’s Bar and Restaurant – got out of hand very quickly, in the best possible way.

When Kristin got in contact with Donal Doherty in Harry’s to get the ball rolling we hoped that we might get half-a-dozen people willing to travel to Donegal. How wrong were we? Once Donal started Tweeting about it, things just took off. By the time we got to Inishowen last Friday, the schedule was packed close to bursting and close to 70 people – a mixture of bloggers, producers, restauranteurs, writers and people who appreciate good food – sat down together for dinner on Saturday night. By that stage, there were no strangers in the room.

On Saturday morning, as Donal, Kristin and I stood up to welcome everyone to the event, I have to confess that there was more than a wee lump in my throat. Harry’s dining room, re-orientated for the day into a lecture theatre, a workshop venue, a butchers’ display area, was packed full of enthusiastic, passionate  food lovers, some who had travelled far distances, all who were ready and willing to celebrate the best of Inishowen, and by extension, Irish food.

It was a weekend of trying your hand at bacon curing and butter churning, food discussions and black pudding demos, meeting friendly faces and putting faces on familiar names. In short, InishFood was a Weekend to Remember.

A few of my favourite moments: My apron from Harry's - thanks Donal!

And then there was dinner. Donal had promised us a Taste of Inishowen feast and he wasn’t joking. There were – I think, my notes went wandering! – six courses, served on large platters to share, family-style. People leaned over and around each other, swapping bites of Greencastle Scampi for Salt Cod Fish Cakes, passing bread to spread with rendered pork fat or the butter that had been made earlier, savouring the lightest Chicken Liver Parfait on slices of toasted brioche, knocking back their shots of Langoustine and Cognac Bisque and spearing Beef Shin Ravioli to disappear in one delicous mouthful. And that was before the main course came out.

Local Saddleback pork and wild Donegal venison, on separate platters, were served in several different ways: I spent the evening trying to figure out if my favourite was the Venison Confit in Hazelnut Crumbs (pity the poor chef I saw grating the hazelnuts earlier that day!) or the melt-in-the-mouth Pork Shoulder Confit. This was no easy meal to serve or explain and full credit has to go to the well-trained staff who took the time to explain exactly what was on each of the platters – no easy task.

After all the classy food, the desert plate had a humourous twist: alongside a smooth, deconstructed Cheesecake, made with Yeats Country Foods cream cheese, and Braemar Farm’s refreshing Buttermilk Ice Cream, there was an unusual panacotta flavoured with a local soft drink, McDaid’s Football Special (now available nationwide!). Chef Raymond Moran did us proud.

All this, and wine too (the red, from Red Nose Wine, was particularly well matched with the mains), was included in the price for the whole day of €40. Add that to the €60 special deal for two nights’ B&B at Linford Castle and you have a weekend that was possibly the best value in Ireland.

Things to take away from the weekend? Irish food – and all Irish food is local, as David Tiernan pointed out – can stand up there with the best in the world and we should be shouting everyday about our local food heroes.  Also, I’m still blown away by the sheer generosity of everyone involved in the event, from the producers’ contributions, raffle donations, the sweet treats that many of the participants arrived with and everyone’s wholehearted embracing of the spirit of the weekend.

There are far too many people to thank individually – this was very much a collective effort – but two people stand out in particular. Firstly, Donal – without your drive (and Tweeting!), none of this would have happened – and most especially my partner in crime, Kristin, for all her focus, organisation and endless Google map printouts!