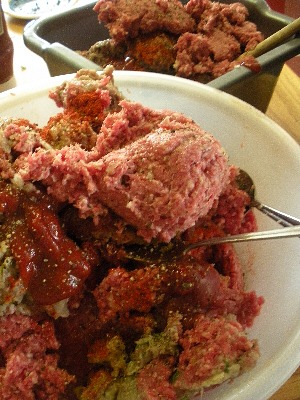 There might be some Sunday mornings when it feels like a good idea to take ten kilos of lamb mince and turn it into enough burgers to feed 400 people but I’m not sure if last Sunday was the one.

The Husband was jet-lagged to the eyeballs after arriving back from China the day before, I was wrecked after driving up and down from Dublin for Lily‘s brilliant IFBA Mexican Supper Club (not all an eating trip – I did actually collect the Husband too) but we had committed ourselves to manning the New Zealand stall at the Kildorrery International Food Fair that afternoon.

This is the best organised, most chilled out food festival I’ve ever been to. It’s a community event in the local primary school, just a fiver on the door and eat your way around the room when you get in. And eat you will. The different nationalities that you can find in a small area always amazes me and this year we had food from the Ukraine, France, India, Ireland, South Africa, New Zealand, Korea and Spain. Everyone cooks their own speciality so that people can go from French waffles to Irish smoked salmon or, if they paused by our New Zealand stall, some local beer with Kiwi know-how from Eight Degrees Brewing and lamb burgers, courtesy of a recipe that I had developed that morning.

Ah yes, back to the morning. We crawled out of bed at my parents’ place early on Sunday (Little Missy had moved in for the weekend and we needed extra hands for burger making) had a sustaining breakfast – and then I broke it to the Husband that the recipe needed a little work. It took a few attempts at mixing, cooking and tasting sample batches and then we were ready to tackle the rest of the ten kilos. At that stage the Student Siblings were emerging from bed so between that pair, the Husband and myself, and my mother (Little Missy constantly trying to get in on the act) we managed to shape 200 palm-sized burgers that were to be cut in half for serving.

The people of Kildorrery don’t waste time. As soon as the doors opened at 2pm we had queues waiting for food. We were one of the few stands actually cooking at the festival and the sweet, spicy smell of frying lamb drew people long before anything was ready. We soon settled into a nice rhythm: while the Husband served and talked beer to an interested crowd (“Didn’t I read about you in The Avondu recently?”), I cooked the burgers and the Little Brother, initially only there as delivery man, was roped into putting them into rolls and handing them out. Despite the exhaustion and a couple of last minute hitches, we had lots of fun and got great feedback on both beer – happy Husband! – and burgers. The recipe below will serve about eight people generously but feel free to multiply it us for the masses.

Lamb Burgers
Of  course you can just finely chop the onions, garlic and rosemary before combining them with the mince but I find this technique makes the burgers hold together better.

In a food processor, blend about 200g of the mince with the onion, garlic and rosemary. Tip into a bowl, add all the other ingredients including the rest of the mince, and mix well. This is easily done with bare hands.

Shape into burgers, place on a tray and refrigerate for at least one hour.

Cook as desired. I don’t like to overcook these, so make sure they retain some moisture.