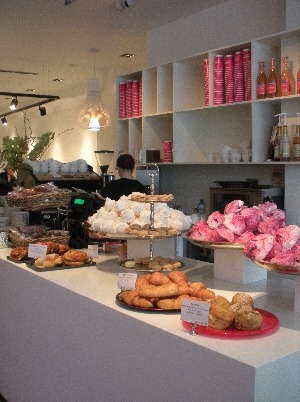 Temptation at the Gourmet Tart Company

Brewers on the Bay was, for me, the beerfest that got away. The Eight Degrees Brewing boys were all present and correct, complete with their well-received Howling Gale Pale Ale, while Little Missy and I stayed with the Schoolfriend, just half-an-hour south from BOTB central, the Olso in Salthill.

Plenty of opportunities to call in and out you might think, lots of chances to take LM for a run on the beach, go for a walk on the prom. But no. The child who never gets sick managed to acquire a 24 hour vomiting bug, complete with high temperatures. A nice visitors’ gift to bring into a house with three young children. Fortunately the Schoolfriend and husband were unconcerned so LM and I took it easy with plenty of strolls and snoozes.

By Sunday afternoon she had perked up enough for a brief Salthill outing so the Husband, having some time out from his hard work (ahem) at the bar, took her for a look at the boats in the bay while I got to briefly check out my second beerfest in nine days. In the past the Oslo was a live music venue but, in its present incarnation, it’s a gastropub and microbrewery. I didn’t get to check out the food side of thing this time round but a plate piled high with golden battered fish and chunky proper chips caught my eye on a walk though the front bar which was packed with familes tucking into their Sunday lunch.

There was a slightly different demographic down the back. The brewers and their bars were arranged around the perimeter of a large high-ceilinged room with a steady flow of punters arriving in all day to taste the wide selection of Irish craft beers on offer. As well as Eight Degrees Brewing and Metalman, Breweyed was another of the newbies with beer on tap. The Husband and the Aussie were kept busy, but not so run off their feet that they didn’t get to explore the delights of the Gourmet Tart Company‘s breakfast, lunch and dinner menus. 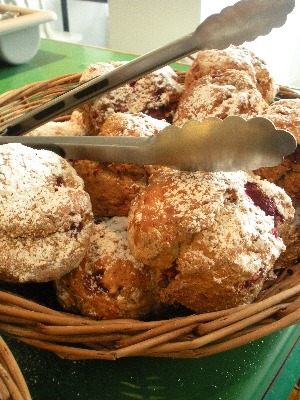 Although very well fed at the Schoolfriend’s house (thanks again, Anna!), it’s always worth trying somethign new and LM and I got to pay the GTC a visit for a satisfying afternoon tea on Sunday. It’s a light, airy canteen-style room with plenty of tempting goodies on offer. There were pink-streaked raspberry meringues piled high on the counter as we walked in but I went for a three-layer chocolate mousse cake. The perfect sugar-rich antidote to a late afternoon slump and Little Missy certainly appreciated the tiny bit of chocolate mousse that she got on her scone. We heard good things from the Schoolfriend about their “four courses for €25” dinner menu – I was only sorry we didn’t get to check it out this time.

Scones are a constant theme while dining out with Little Missy (she’s addicted after getting the best from her Scone Queen Nana) and we met some giants the following morning when we stopped at the Providence Market Kitchen in Clarinbridge. These were big berry-filled hunks, served up with butter and raspberry jam – just in case you didn’t get enough fruit. The Husband’s long-awaited fry (he had been busy packing up the Eight Degrees van all morning) got a resounding thumbs up while Little Missy didn’t know whether to concentrate on her whopper of a scone or steal bits of black pudding from my plate. The pudding, and accompaning fried potatoes, were cooked with something like a panini press so that they had neat crusty, crunchy ridges on both sides. With Claire’s Tea Rooms just down the road, figuring out where to stop in Clarinbridge is not going to be easy in the future.