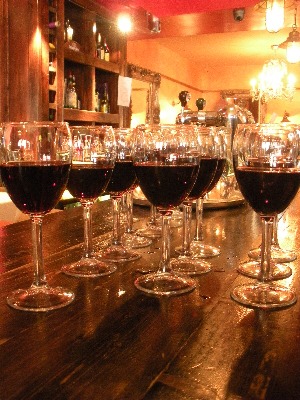 A little wine in Salamanca

The best thing about travel is the opportunity to eat new things. I’ve gone to Morocco with visions of sweet-savoury tagines dancing in my head, a stop over in Kuala Lumpur means devouring plates of roti canai with mugs of teh tarik and, when I went to Barcelona with the Sister, I did plenty of tapas, ahem, research. But sometimes you don’t need to travel to see food in a new light.

The  Campo Viejo Tapas Trail, just launched last week, gives you the opportunity to be a tourist in Dublin. On Saturday I took some time out from Bloom to spend an afternoon eating with the winners of our IFBA competition. With the Husband tied up at the Eight Degrees Brewing stand. Little Missy was my +1. I wasn’t quite sure how far around the trail I would get with a pushchair and two-year-old.

It’s a simple format: in a group of twenty you visit five different venues in the city centre – Bar Pintxo, the Port House, Salamanca St Andrew’s Street, Salamanca Parliament Street and Havana Tapas Bar – all within comfortable walking distance of each other. A glass of Campo Viejo wine is handed to you when you arrive, followed by three types of tapas for tasting. Chefs explain what you’re devouring, dancers perform and musicians play.  By venue three, third glass of wine in hand, any ice has been well and truly broken, everyone is rapidly on the way to becoming best friends and, if you have a Little Missy with you, she’s getting all the attention any self-respecting toddler could expect. Paul, our tour guide, made sure everyone was enjoying themselves and the walks between venues were sprinkled with historical facts and Joycean declamations. 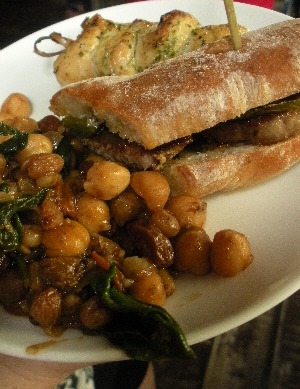 A mouthful at Bar Pintxo

For me there were two stand out dishes of the fifteen we tried: a pork cheek mini burger at Salamanca and some small, salt crusted potatoes that we dipped in a garlic, chilli and almond sauce at the Port House. I’ve earmarked some of my current black pudding glut for a dish of Chickpeas with Black Pudding and Spinach (recipe from Bar Pintxo) and Little Missy loved the Port House paella, especially the slice of lemon on the side.

She, surprisingly – afternoon is her nap time – rose to the occasion. With helpful hands to carry her pushchair up staircases and staff in several venues inquiring if there was anything special they could get for her, she decided it was well worth sticking around until the end of the tour.

After an afternoon of pure indulgence – we were exceptionally well fed, entertained and wined – even the sun-soaked Dublin streets took on a new glow. A Spanish time out in Dublin town.

The Campo Viejo Tapas Trail (it might be a little more relaxing without your own Little Missy in tow!) is taking place on Wednesday evenings and Saturday afternoons throughout June and costs €20 per person. There’s more information on their website and Facebook page. Thanks to Conway Communications who invited me along as a guest – and didn’t baulk at me bring a toddler along.