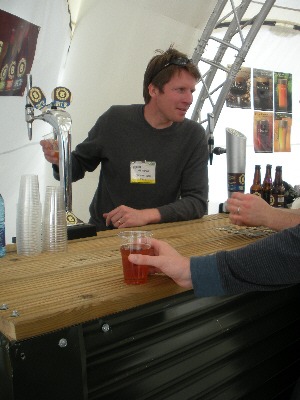 Howling Gale Ale from Eight Degrees Brewing, TJ Crowe‘s pulled pork rolls and Ed Hick‘s bacon jam: good things to drink, eat and take home from Bloom 2011. It was a weekend of appreciating good food and, from my homebase in the beer tent (or Bloom Inn, to give it its correct name) lots of great Irish microbreweries to investigate.

Little Missy and I spent part of Saturday, just before we headed off on our Campo Viejo Tapas Trail, enjoying glorious sunshine at Bloom – the Murphys’ Ice Cream stand across the way had the longest snaking queue – returning for some more quality time on Sunday and Monday. The food village, which is where we were situated, was thoughtfully laid out. Gigantic tents (“funfair!” said LM) and marquees were filled with artisan producers and microbreweries alongside Bord Bia’s Best in Season and Farm to Fork projects.

These were centred around the chefs’ demonstration theatre which, being temptingly wide open, allowed passers by to see exactly what was happening on stage. Ella McSweeney was the MC, introducing chefs and joining the dots between farm-producer-chef by collaring producers – including the Husband – and getting them to talk about their products.

With plenty to eat, drink and watch nearby, there was simply no reason to leave – to my shame, I never got to venture into the gardens. But, after all, I did have to practice pulling glasses of beer. From eating all the meat out of my Country Choice steak sandwich to sitting on a beer keg, slowly spooning her careful way through Glenilen yogurt with rhubarb, Little Missy had a ball. People to watch, nice things to eat, kids and babies coming over to play: what two-year-old wouldn’t be in seventh heaven? 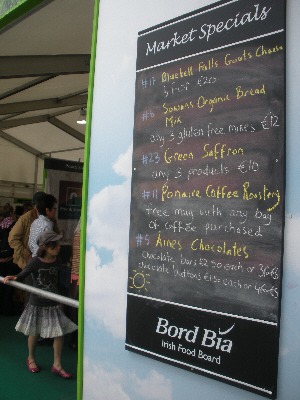 A few of my favourite producers

The best of Bloom:

Because we were bringing kegs to Dublin, there was finally a chance to deliver one to the Bull and Castle in Christchurch so now Howling Gale Ale is finally on tap in Dublin – enjoy!