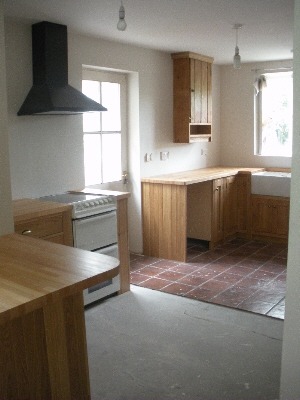 Kitchen installation - look at the space!

It might feel like a long time but thanks to my wonderful builder (on time, on budget, fantastic to deal with), the cottage is finished – all, bar the painting. And the flooring but, due to funding issues, that’s not likely to happen for a while.

After all my agonising over what to do about the kitchen, the builder came up with a solution: Woodcraft Kitchens. Located nearby in Ballyclough, this company makes kitchens to measure. There’s not an inch of wasted space or filler and they were also able to incorporate my two old over-counter presses into the new design.

The only thing that’s holding things up now is my “unusual” Belfast sink. We only discovered yesterday morning that the new taps I had sourced don’t have long enough fittings for this particular kind of sink. Fortunately the builder has come up with a solution and the plumber was out on a mission this morning which, hopefully, will enable us to get the final installation done in the next few days.

This weekend was originally designated for moving house but with the Husband being ill last weekend, the painting – which, of course (for our sins), we’re doing ourselves – got a little delayed. The major priority was the kitchen so, everyday from Friday through to Monday, my long-suffering mother and I, along with a helpful Little Missy, were around at the cottage from 10.30am to 4.30pm. 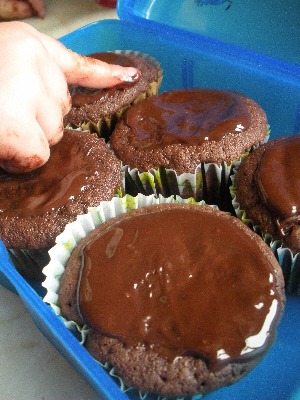 Someone liked the Chocolate Cupcake icing

The first things that came with us were, naturally enough, the kettle and teapot so the weekend’s work was much assisted by plentiful cups of tea, teabracks from both houses and picnics of bread, cheese and the occasional lentil salad.  There was also a few morale-boosting Chocolate Cupcakes, which LM just had to help me pack. She had lots of fun icing them too.

Despite all the help we got from Little Missy, we managed to do one undercoat and two coats of colour before my kitchen arrived on Tuesday morning.

Now there’s only the rest of the house to go…