All finished! Our gingerbread house 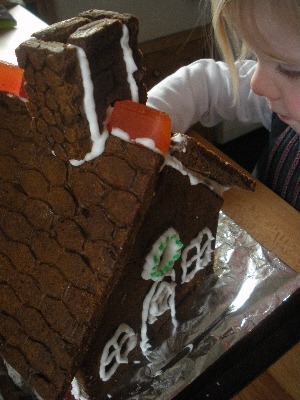 I like to think I’m the kind of person who doesn’t need too many kitchen gadgets. But that wouldn’t be exactly true.

But, while I can happily cook on a one-ring gas stove while camping, the breadmaker, slow cooker, food processor and, ahem, Kitchenaid, that clutter our kitchen would attest to the opposite.

And, last month, while I was amidst the mania (fun) of breastfeeding the Small Girl while keeping two-year-old Little Missy from murdering her little sister, I spotted – of all things – a gingerbread house mould pan.

A perfect project for Christmas, yes? Hmm…never underestimate the time needed to make a gingerbread house from scratch. Never. Especially with all the “help” that you get from a two-year-old Little Missy. And that’s not counting the interruptions from her teeny tiny three-month-old Small Girl sister who needs a feed NOW.

Our first gingerbread house bears a striking resemblance to the cottage, apart from the wine gums along the ridge. Although the entire process took about a week, off and on, LM was charmed with the process and only ate a few of the extra pieces.

Just wait until I’ve a pair of them to get stuck into making next year’s edible des res.