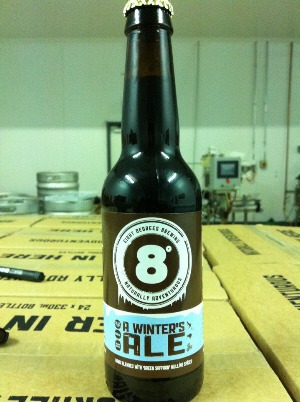 Beat the freeze with Eight Degrees!

Last week I was up in Dublin for the National Crafts & Design Fair in the RDS, doing a couple of demonstrations on the Cooks Academy stage  in the Food Emporium. The title of my demo was Baking with Irish Craft Beer and I had a lot of fun using beers from Eight Degrees to develop recipes for Cheese and Herb Beer Bread, Brownies and this Salted Caramel Ale Sauce.

When I first started work on the recipe for this sauce I was looking for a way to use the seasonal beers that appear in the run up to Christmas.  And then Eight Degrees Winter Ale, made with a specially fragrant spice blend from Green Saffron, turned out to be so popular that there wasn’t even a random bottle left in the brewery for me to play with.

Now I often make this with Knockmealdown Porter, which gives it a completely different flavour profile – much more coffee-like – and a pinch of the extra Green Saffron spices. Try it yourself with any microbrewery porter or stout and a ¼ teaspoon of mixed spice, sourced from Green Saffron if you can at all manage it.

A great standby to keep in the fridge – it seems to last for ages – the Caramel Ale Sauce can be reheated to serve with cake and cream or yoghurt for a desert to remember. If you’re making an apple tart, put a couple of tablespoons of the sauce under the pastry top before cooking for an extra special treat.

If you’re looking to get you hands on this limited edition beer for Christmas, order as quickly as possible as the brewery is completely out of stock. The Little Sister, who spent the summer labelling bottles for the boys, was most unimpressed at being told that she had to hit the off licences in Cork to get her hands on a bottle.

Salted Caramel Ale Sauce
This is a good recipe to try with some of the seasonal beers that come out around this time of the year. I’d recommend the Spiced Winter Ale from Eight Degrees Brewing. Makes enough to keep four people very happy. Try it with stout or porter as well, just avoid anything that’s going to taste too hoppy when it is reduced

Bring the beer to a boil in a heavy saucepan over a medium heat and cook until reduced by two thirds, to approximately 110mls. Depending on the size of your saucepan, this can take from 10-15 minutes.

Add the butter, sugar and salt, stir until everything has melted, then whisk in the cream and vanilla. Bring back to the boil and cook, bubbling rapidly and stirring regularly, for another 6-8 minutes until it has thickened.

Serve warm over ice cream, with chocolate cake or, for the double whammy, with the Chocolate Porter Brownies and a dollop of softly whipped cream on the side. This also keeps well in the fridge and can be reheated.