Ten years on – and eating around Cork: The Castle, L’Atitude 51° and Gort na Nain 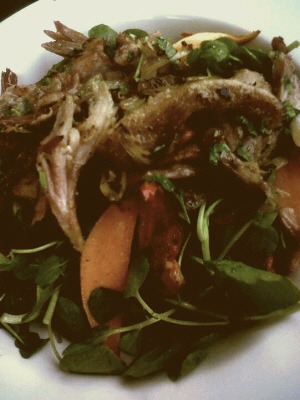 That was the moment when I made a decision that set my life on a totally new path.

Rather than go home, as planned, to hang out with the Small Sister and Brother for New Years Eve, I made a spur of the moment phone call and headed for Cork to stay with the Sports Editor. As it turned out, he was also expecting a few more visitors: an Englishman, a Scotsman – and a Kiwi.

Ten years later, that impromptu trip has had many consequences.

What may have started as a brief fling – he lived in Cambridge at the time and was planning a five-month overland trip home to New Zealand – resulted in a Boyfriend, who subsequently became the Husband. We left our city lives for a country cottage, complete with hens, cats and a half-acre garden. Along the way, we acquired two gorgeous girls, an engineer became a brewer – and we’ve eaten a hell of a lot of good food.

On Friday, with Little Missy on holidays at her grandparents’ place and the Small Girl packed in the Eight Degrees van with us, we embarked on a food-orientated anniversary trip, in and around the city where it all started. 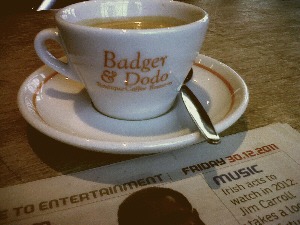 Time for coffee and newspaper

Lunch was at The Castle, a buzzy café and restaurant located at Cork’s Blackrock Castle. Shreds of the sweetest, twice-cooked ham hock lifted my salad above the ordinary but the Husband’s (jealously guarded) fish and chips won the most-enviable-dish award in our corner, inspiring a neighbouring table to call for the lunch menu.

I postponed my caffeine fix until we got to L’Atitude 51°, a new wine bar in the old Lobby Bar/An Cruibin location. Badger & Dodo is the coffee on offer, the unusual sweet somethings on the counter come from their own French-orientated kitchen (I couldn’t justify a chocolate madeleine – but oh, how I wanted to!) and there are always plenty of newspapers during feeding time for the Small Girl. 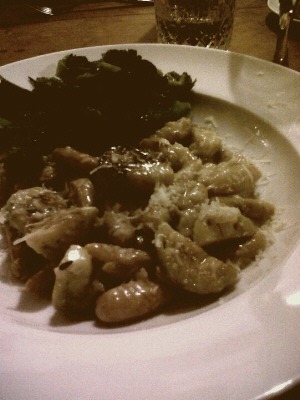 Rather than stress about juggling a Small Girl and restaurant dinner, we took the easy option and headed to our favourite guesthouse. We’re unashamed fans of Gort na Nain, returning year after year for the restaurant-standard food in an informal setting, comfortable rooms and, always, great company and conversation. Pick of our three course meal? The starter of juicy, delicate scorzonera – a new vegetable for me – which was served with beetroot and salad leaves, drizzled with a delicious creamy dressing.

After a relaxed breakfast of Lucy’s unbeatable chestnut sausages (recipe in Denis Cotter’s latest cookbook, For The Love of Food, although always best eaten at Gort na Nain), pots of coffee, homemade jams and honey from the farm, it was time for a walk.

We headed, in reminiscent mode, to Garretstown Beach where we had walked together for the first time on 1 January 2002. It might have been a day early, but it felt like we had come full circle. Ten years on, and we’re just getting started.