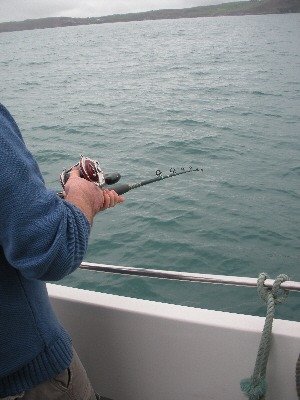 Peace.
That’s something that’s in short supply these days, especially when life includes a  active toddler, a  adorable baby, four cats, two hens and a brewery.

Last Saturday, as I stood on a gently rocking boat off the coast of West Cork, fishing rod in hand, gazing across the sea at the Old Head of Kinsale, I had one of those rare moments when you know for certain that you’re totally relaxed. No smallies, no animals, no problems. It was just me, a few other newbie fisherpersons – and the fish that were to become our lunch.

We just had to catch them first.

The Husband and I were there with several other food bloggers as guests of Inchydoney Island Lodge. The fishing trip – a first for many of us – was part of a weekend that showcased the very best of West Cork food and hospitality. It was also pure indulgence.

The Nespresso machine in our room got an effective work out so that we could enjoy coffee on our balcony – in the sun! with chocolates! – while the Small Girl slept. Breakfasts were eaten in a bustling dining room overlooking the sparkling bay, with my favourite bircher muesli, just-baked walnut bread and fresh fish on offer, alongside the regular breakfast dishes. 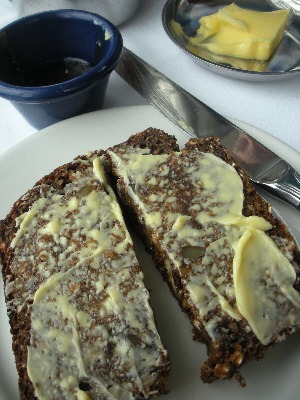 Some butter – with a little bit of that walnut bread

But it wasn’t just sitting around and eating all weekend, oh no. The Small Girl enjoyed long walks in her sling on the pristine beaches either side of the hotel, enough justification – I told myself – for the amount of food that came our way.

We also paid close attention, from our balcony (with, ahem, coffee/chocolate/novel in hand), to the surfing school that was taking place on the beach below and promised ourselves that we’d do that, next time. On Saturday night Sally McKenna and Jim Kennedy of Atlantic Sea Kayaking spoke passionately about their seaweed foraging trips: yet another reason to return.

After we checked out the variety of seaweed that Sally and Jim had brought with them, it was time for the pièce de résistance of the weekend – a spectacular meal, a Taste of West Cork, eaten in company with many of the producers featured on the menu. We had the good fortune to be sitting between Ummera‘s Anthony Creswell and Sara Devoy from Devoy’s Organic Farm so that we discussed growing unusual vegetables, the joys of polytunnels and hot vs cold smoking while devouring Ummera salmon, Castletownbere shellfish, a refreshing beetroot and raspberry dish and a delectable fillet of West Cork beef. There was a wild rabbit dish that, after our bunny issues at the cottage, we very much appreciated, the Husband looking for tips from rabbit-catcher extraordinaire Dan McCarthy. 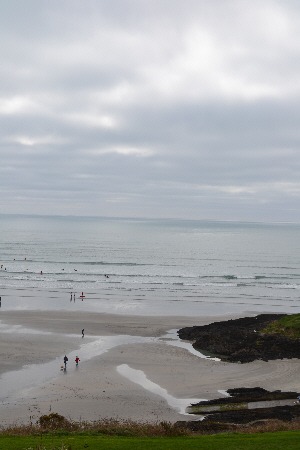 The view from our balcony

Although we were satiated after five courses at table, which had been preceeded with morish oyster and pearl canapes (think smoked oyster pate in a mini cone, topped with jewel-like cod roe) as we gathered before dinner, chef Adam Medcalf still had a trick up his sleeve to finish.

Sweet Spring Chicken, Fresh Laid Eggs looked like breakfast had arrived early: to all appearances, it was a poached egg with toast soldiers for dipping. But the egg white was meringue, filled with lemon curd, and the fingers of “toast” were glazed shortbread.

It’s very easy to pay lip-service to the idea of local food but we saw the proof on our plates not just at that dinner but in the Glenilen butter on the table, the Ummera gravadlax in the breakfast buffet and the O Conaill’s chocolates in our room. Meeting the producers made real the connection between the hotel, its location and what we were eating. It also showed the importance of spending money nearby, making a difference to individuals, rather than sourcing ingredients from a faceless distributor.

And the fishing? Although none troubled my particular line – maybe they didn’t want to disturb the peace! – our boat came home with a triumphant catch of 22 pollock and colley. Fresh, sustainable and eaten for lunch, with some baked rooster potatoes and lots of that butter.

West Cork? There’s a lot of eating in it.

We were guests of the Inchydoney Hotel Lodge & Spa, as part of an event that involved several fellow food bloggers, and was organised by Conway Communications. The hotel also rents self-catering apartments and will organise activities for guests such as fishing, kayking and whale watching.  We discovered that you don’t need fishing experience to come home with lunch!