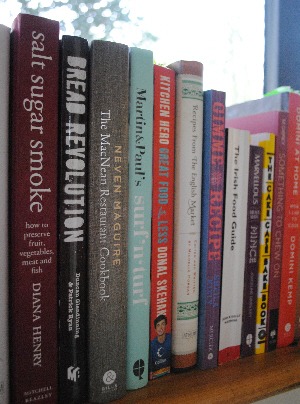 When all the baking and cooking and running around is done, finding a stack of cookbooks under the tree is one of my favourite things about Christmas. It’s also one of the few times of the year that I have time enough to read through an entire cookbook at one sitting, eating my way through a box of truffles or plate of cheese in conjunction with bookmarking future feasts for the New Year.

Here are a few ideas for your own Christmas list, or that of a food lover that you know. It might be a little too late for guaranteed Christmas delivery if you order online so it might be time for a trip to the shops. That said, one year my Little Brother ordered all my presents online a few days before the big day. “Loads of time left for Christmas shopping, Caroline, loads of time,” he said as he clicked and ordered – and had them actually delivered on time.

That’s not to be recommended though. 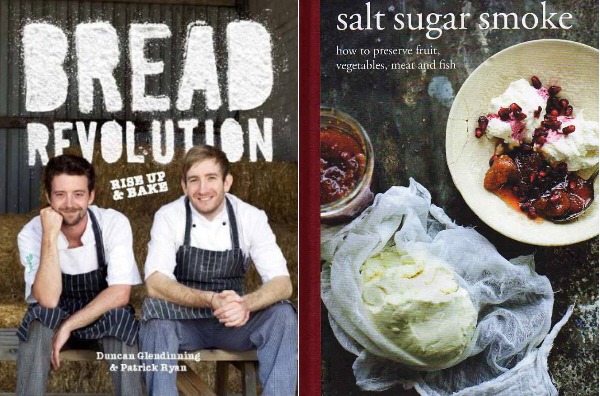 The a-new-project-for-the-new-year cookbooks: Bread Revolution by Duncan Glendinning (Murdoch Books) & Patrick Ryan, Salt Sugar Smoke by Diana Henry (Mitchell Beazley)
A new year, a new start – and some new skills. Patrick Ryan spent the year spreading the sourdough gospel from his baking classes at the Firehouse Bakery and Bread School on Heir Island to a very receptive audience. This book, with plenty of recipes for sweet and savoury breads, along with the trimmings to turn a simple loaf into a meal, will fire anyone’s passion for breadmaking. Diana Henry’s cookbooks have the honour of being some of the most stained in my collection and this brilliant preserving book will be getting the same treatment. She tackles plenty of basic skills, but the recipes often come with a twist. Thinking jam? Take a look at Blackberry and Pinot Noir Jam, Melon, Lime and Ginger Jam, Rhubarb, Rose and Cardamom Jam. Something cured? Try Stephen Harris’ Maple-Cured Bacon or the seasonally coloured Beetroot-Cured Gravlax. And, once you’ve tried brining your own pork chops with maple and juniper, you’ll never look back. For now, both the New York Sweet Cranberry Mustard and Christmas Chutney are on my must-bake-this-week list.
www.thefirehouse.ie
In Diana Henry’s kitchen | The Foodie Bugle

Give to: the friend who loves a project, the sister who enjoys making her own breads and chutneys 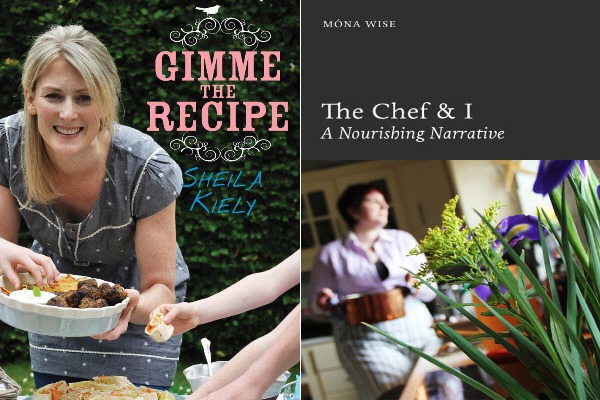 The blog-to-book cookbooks: Gimmie the Recipe by Shelia Kiely (Mercier Press) and The Chef & I by Mona Wise (Wise Words Ltd)
With ten children between them, the fact that these ladies have time to blog is amazing. The fact that they also have brought out books this year – Mona’s a self-published creative writing project completed in 24 weeks – will have any mother taking her hat off to them. Shelia’s six kids played a large part in testing and critiquing her family-friendly recipes while Mona’s four, and her chef, shape the narrative of this memoir with recipes.
www.gimmietherecipe.com
www.wisewords.ie

Give to: any mother seeking inspiration – both in the what-will-I-feed-the-family and what-will-I-do-next areas. 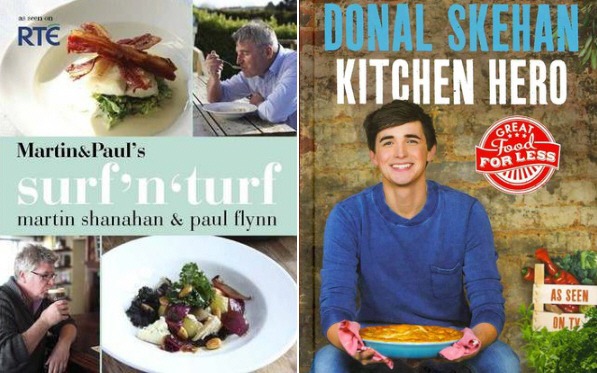 On your screen - in your kitchen

The TV-tie-in cookbooks: Surf’n’Turf by Martin Shanahan & Paul Flynn (Quadrille Publishing) – Kitchen Hero by Donal Skehan (Collins)
These gents have graced our screens during the year and now they can sit in your kitchen. While the surf versus turf debate gets a little tired – just give me the lot! – Martin and Paul have a great air of mischief about them and there’s no shortage of quick, snappy recipes here. Stock up on butterbeans and you’ll have covered at least four great meals. Donal’s Mushy Roast Garlic Sausage & Spaghetti Dinner was a staple at the cottage this winter – an inexpensive, bung-it-in-the-oven dinner and no easier way of getting brewers and childers alike to eat a whole bulb of immune-system boosting garlic. The whole book is full of similar ideas, lots of easy, tasty options that will ensure this book gets a regular work-out.
www.donalskehan.com
Martin & Paul’s Surf ‘n’ Turf – RTÉ Food

Give to: your favourite telly addict as a gentle nudge to encourage them off the couch and into the kitchen (so they can make you dinner!) 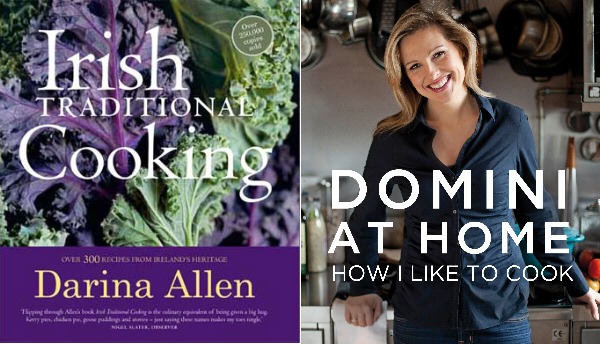 The Irish Examiner and Irish Times columnists’ cookbooks: Irish Traditional Cooking by Darina Allen (Gill & Macmillan) – Domini At Home by Domini Kemp (Gill & Macmillan)
There was a time when I used to get away with just one newspaper on a Saturday; now it’s got to be both the Examiner and the Irish Times to keep up with their extensive food coverage, which includes weekly columns from Darina and Domini. Irish Traditional Cooking is a revised and updated reissue of Darina’s 1995 classic book and is packed with historical information, quotations and recipes that are both useful and historically accurate. This will be adored by people who wonder what the “correct” Irish Stew recipe is and anyone who wants a collection of timeless recipes. Anyone who’s ever clipped recipes from Domini’s column will enjoy this trip through many different cookbooks, all filtered through her healthy, no-nonsense lens. With her inspiration coming from Anthony Demetre, Thomas Keller, Cornucopia, Bryn Willliams and Skye Gyngell, it may lead you down a rabbit hole of more cookbook buying.
www.cookingisfun.ie
Domini Kemp – The Irish Times

Give to: the traditionalist historian cook in your life needs Darina while Domini is for anyone who’s ever looked longingly at an Ottolenghi recipe and dismissed it as being needlessly complicated. 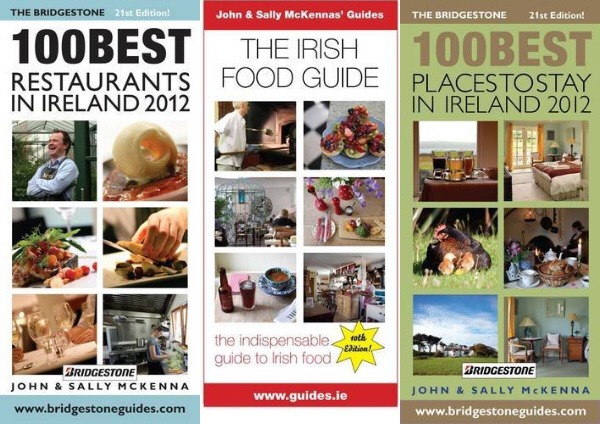 Eat your way around Ireland

The for-anyone-who-loves-good-food book: 100 Best Restaurants in Ireland 2012, 100 Best Places to Stay 2012, The Irish Food Guide by John & Sally McKenna
I’ve been writing for the McKenna’s Guides for the last couple of years, but have been buying, using them and pressing them on friends for far, far longer.  The Irish Food Guide is the book that lives permanently in the passenger side pocket of my battered old Toyota for any impromptu roadtrip – life is too short and money too tight to fork out for a watery cup of coffee and a carelessly made sandwich. For a recent unexpected stop in Gort, it led me to the gloriously eclectic Gallery Café: one comforting lentil and veg hotpot and good Americano (nice to come across a Badger and Dodo outpost in Galway) later and I was able to face the road with renewed vigor. The 100 Best books are the essential go-to reference for nice dinners and nice overnights, some to be enjoyed without little girls and others – there has to be an annual trip to Gort na Nain! – for the entire family to enjoy. In a word, essential.
www.guides.ie

Give to: your other half, along with a voucher (many of which can be bought online right up to Christmas) from one of the establishments listed – and a stipulation that you’re the one to be taken along.

Finally, I have just received a press release saying that Food & wine Magazine editor/restaurant critic Ross Golden-Bannon is about to release an ebook called How to Write About Food: The top 50 writing bloopers to cross an editor’s desk. Apparently it will be available on Kindle, Amazon and www.howtowriteaboutfood.com for approximately $3.68.