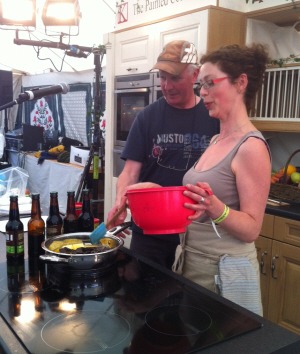 2012 was the year of beer. And that year involved a hell of a lot of talking and tasting and discovering and cooking with Irish craft beer.

There were beer tasting events and beer pairing dinners from Donegal to Kilkenny, at Inishfood, Savour Kilkenny and with The Supper Club Project. There were childhood food memories and Porter Cake on a big blue bus at the Dingle Food Festival. And there was the Theatre of Food which let me take my Irish craft beer baking, matching and tasting demo on the road for the Liss Ard Festival, Dublin Tall Ships and the Electric Picnic.

In fact, the whole idea of free beer at EP – I was there with Eight Degrees Brewing along with Claire from the Dungarvan Brewing Company – plus the chocolatly aroma of baking brownies wafting from the Theatre of Food tent almost caused a stampede at the end of our presentation. The still-warm beer brownies, washed down with some Knockmealdown Porter, were put out on plates and hoovered up by an audience that suddenly seemed to increase three-fold.

No waste. Lots of fun. And some very good beer. 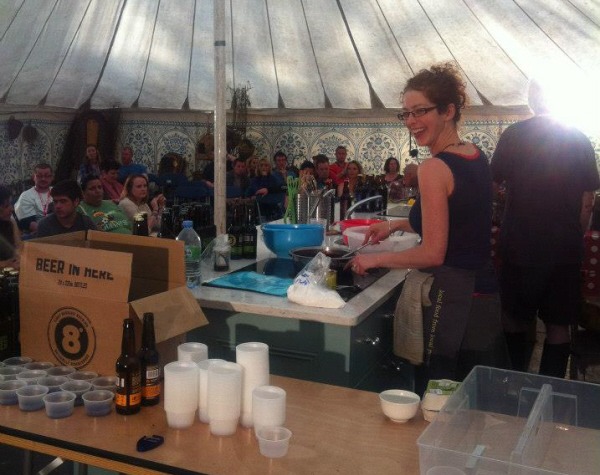 All set up for EP Theatre of Food

On tour with the Theatre of Food – Festival Food, by Caroline Hennessy | John and Sally McKennas’ Guides
Music festivals were never about food. The Trip to Tipp was Bryan Adams, Extreme and vinegar-soused chips from a van. Witnness had Badly Drawn Boy, The Flaming Lips, Nina Hynes and more of the same in the edible line. Oxegen was a step up. The Darkness, PJ Harvey and Snow Patrol soundtracked my first taste of festival noodles and spicy falafel…more