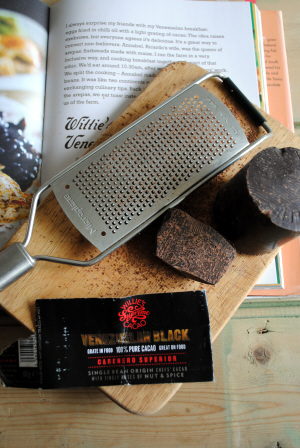 Getting set for lunchtime

It’s nearly Easter egg time but, with a wide range of dark, complex bars of chocolate now available, why limit yourself to its sweet side? A few years ago I spoke to chocolatier Willie Harcourt-Cooze about his mission to introduce 100% cacao bars as a new gourmet cooking ingredient, prove that chocolate is not just for pudding, and his Irish roots.

“I dreamt of making the finest chocolate in the world!” The charismatic Willie Harcourt-Cooze is in full flow, describing how he started on the journey that had him arrive on our television screens in 2008 as the star of Channel 4’s fly-on-the-wall documentary, Willie’s Wonky Chocolate Factory. He was a romantic hero, an ever-so-slightly demented man with a mission, in his efforts to bring the cacao beans that he grows on his Venezuelan plantation to market in the form of intense 100% cacao bars – and to educate people on the wider uses of this kind of chocolate.

Harcourt-Cooze almost burst out of the small screen. With his crazy ideas, big plans and boundless enthusiasm it was impossible not to get swept up in his passion as we watched, fascinated, to see if he had the practical skills to turn those dreams into reality. That project was a success. With enough will-he, won’t-he tension to keep people hooked, Harcourt-Cooze produced the bars (by the skin of his teeth), got them into shops, had people asking for cacao instead of chocolate, and started a whole new craze for using it in savoury dishes.

In Dublin for the Temple Bar Chocolate Festival a few years ago, he had lost none of the evangelical zeal that he brought to that television series and a subsequent one about his efforts to produce a sweet bar of chocolate. He arrived armed with samples that he laid proudly on the table before us, waxing lyrical about the variety of beans used. “The fact that I produce chocolate in such small amounts,” Harcourt-Cooze points out, “means I can process different types of beans and bring out those different flavours. That’s what I find so exciting.”

He credits his childhood in West Cork for playing an large part in his determination to be involved at all stages of the chocolate making process. When Harcourt-Cooze was three, his father bought Horse Island in Roaring Water Bay and he and his family embarked on a self-sufficient good life. “The way I grew up, if we wanted something, we made it from the raw ingredients. I remember we made elderberry and gorse wine, elderflower champagne and beer. We had a field for barley, oats and wheat that we milled on the back of the tractor. We had two goats and we milked them to make yoghurt and soft cheeses. It was that kind of upbringing and that was the foundation for the future.” 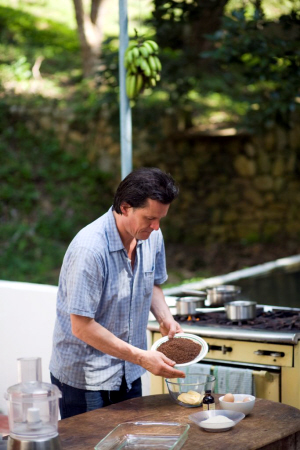 While milling flour, growing vegetables and foraging as a child, Harcourt-Cooze learned the value of good quality ingredients. Years later, after he and his wife Tania bought a remote hacienda in Venezuela and started growing their own cacao, it made sense to him to see the product through from exceptional bean to first class bar. When the couple and their three children settled back in England he set about building his own chocolate factory in Devon but it wasn’t until the television series started filming that he really hit high gear.

The sweet bars are intensely covetable little objects. Exquisitely packaged in a neat, dark brown box which contains two squares, their various fruity, caramel, and nutty notes are like the gateway drug, the introduction to a new world of chocolate. Having tasted these, it is just a small step to start experimenting with 100% cacao.

These dark, cylindrical bars are Harcourt-Cooze’s main passion. His breakfast treat, a simple but truly delicious way of trying savoury chocolate, is to grate some 100% cacao over eggs fried in chilli oil. For him, these all-purpose bars are an everyday condiment and he sees them as something to keep on hand alongside the olive oil. “I liken it to salt – and imagine food without salt?” he asks, his mind running ahead with ideas. “Try it next time you’re making your Sunday gravy. Add a tablespoon or teaspoon of grated cacao, stir it in. It won’t make it taste like chocolate but it will add a full bodied richness. Having the cacao in its raw form with no sugar enables you to go down these different streets. You could make a really good chocolate cake out of it – or use it in your casseroles.”

With – at the time we met, – five sweet bars, nine 100% cacao bars and a cookbook already under his belt, what’s next for Harcourt-Cooze? He smiles. “Well, I’m looking for [cacao] beans with interesting flavour profiles.” Leaning forward intently, he’s off again, talking about working with cacao farmers in Uganda and being sent samples of wild cacao from Bolivia. “The next step is the the quest for these different flavours and to bring them for people to taste. I mean,” he laughs irrepressibly, scarcely able to believe his luck, “I feel like a little school boy in some ways, saying ‘hey, look at that!’, excitedly wanting to show the world what I’ve found.”

Egg, avocado, toast - and some chocolate

Chilli-Cacao Fried Eggs
This is good enough on its own for a simple lunch but is also gorgeous served over brown rice, polenta, Fennel-Aniseed-Caraway Bread, fried potatoes or Mexican Beans.

Heat chilli oil in a small frying pan – not too much, beware of choking chilli fumes! – and fry egg.  Meanwhile, toast and butter the bread, slice the avocado. Serve the egg on top of the buttered toast with the avocado on the side and plenty of grated cacao on top. Devour!