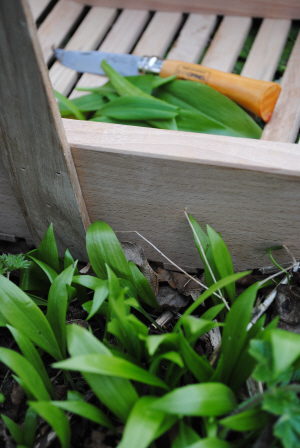 Wild garlic for the picking

It’s the time of year when every woodland walk is done with a nose cocked for the scent of wild garlic. When living in Dublin, the almost-rank smell of the late-season blooms was an olfactory background to May-time camping trips around Wicklow. Although I knew what it was – anyone who catches a whiff would recognise it immediately – I never bothered to pick or cook with it. Now, wild garlic appears on restaurant menus every spring with clockwork regularity and I’m not the only one to follow my nose to the source of that distinctive smell.

I try to pick the wild garlic early and often, as I know it can be used for salads and soups, turned into pestos and flavoured butters. I have a little growing outside in the garden – as long as I can keep Little Missy from feeding it to the Small Girl – but for a real wild garlic harvest, I head to (shush!) Doneraile Park which is carpeted in the vibrant green, spiky leaves. Last week I baked some in a sumptuous Wild Garlic, Leek and Potato Bake, a recipe I found in the recently published Wild Food by Biddy White Lennon and Evan Doyle.

While in BrookLodge last year for the Dianne Jacob food writing workshop, Doyle gave us an inspirational talk on wild food and how they use it at his Strawberry Tree restaurant. We were introduced to their resident forager and visited the cool, dark and well-stocked wild food pantry that is situated just off the dining room. The space also doubles as a cheese cave so, when I added a cheese course to the end of our lavish Big Table feast that night, I got to take another peek at the well stacked, neatly-labeled bottles and kilner jars that line the walls as I cut my chunks of cheese. Schnapps, cordials and lemonades made from wild ingredients jostle for space with jams, ketchups and pickles; the distillations of seasons past, ready to use with today’s ingredients.

Wild Food is the natural offspring of that pantry. It’s a guide to what is available, when it is in season, where to look and what you can do with the leaves, berries and mushrooms that you’ve gathered. There’s no time to waste! From the earliest nettles, accompanied by a recipe for Nettle Beer, to the sloe – Sloe Gin Macaroons – and stopping off at sea lettuce, sorrel, cep and crab apple on the way, the year is punctuated by its wild bounty and this neat little hardbacked book will help you to make the most of it.

In the meantime, take yourself down to the woods, get your hands on some wild garlic and try this dish 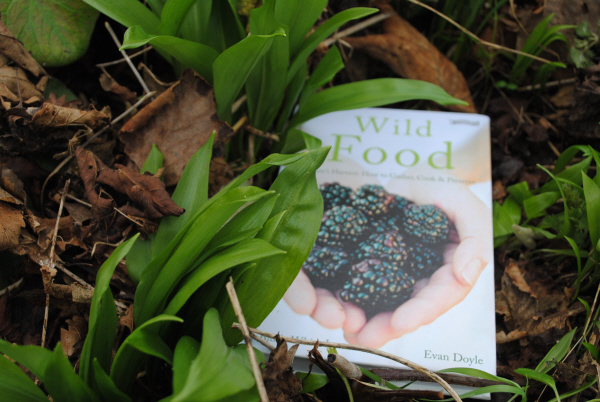 Wild garlic and book: this is what you are looking for

Wild Garlic, Leek and Potato Bake
One problem that I had with this book was an absence of information on how many servings each recipe would produce. As a result, when I weighed out the 500g potatoes that the original recipe called for, I didn’t think that I would have enough to feed two hungry brewers, two small girls and myself. I doubled the amount, ended up with a huge pan of deliciousness and have to say that it reheats very well. This is the doubled recipe.

Bring the stock, cream and milk to the boil over a medium heat and season well.

Use the knob of butter to grease the sides and base of a large ovenproof dish – mine is a 32cm by 22cm cast iron roasting dish. Layer up the ingredients – I used a one-third of the potatoes on the bottom, sprinkled with half the wild garlic, followed with half the leeks and ham. Another third of the potatoes, then the rest of the wild garlic, leeks and ham. Finish with a layer of potatoes.

Pour over the hot liquid, cover the dish tightly with foil and bake in the preheated oven for 40 minutes.

Take off the foil – it might be worth pushing some of the top potato layer down under the liquid at this stage – sprinkle with cheese and return to the oven for another 40 minutes or until browned, bubbling and the potatoes are cooked through.

Serves 6 as a main course with some zesty winter salads – like this Crunchy Apple Coleslaw – to accompany.

Adapted from a review copy of Wild Food by Biddy White Lennon & Evan Doyle, which was sent to me by publishers The O’Brien Press.

Kristin wrote a piece on the workshop for the IFBA website here: Top Tips from Dianne Jacob’s Food Writing Workshop