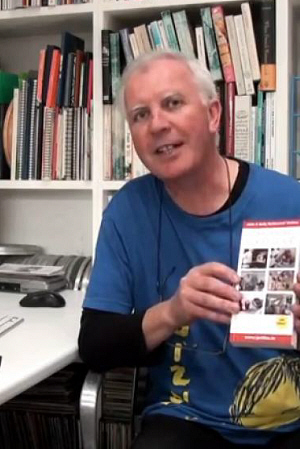 For the feature I wrote in last Saturday’s Irish Examiner, several food writers and bloggers spoke to me about digital media, multimedia in a food writing world and their top picks for online food information and inspiration.

There’s a limit on the amount of quotes that you can fit into a newspaper article so I’ll be featuring the text of my interviews with John McKenna, David Kiernan and Aoife McElwain on the blog this week.

John and Sally McKenna of the McKennas’ Guides, who have been publishing guide books to Irish food since 1989, are firmly entrenched in the digital world. Along with the books, the guides.ie website, their lively Twitter presence and Megabites blog, they have been making a series of short artisan food videos, starting with an elegiac portrait of Ballymaloe matriarch Myrtle Allen.

John spoke on the evolution of food writing with Matthew Fort at the Ballymaloe LitFest; as it turned out I was interviewing Sandor Katz at the time. Fortunately I managed to track him down in West Cork and he was good enough to give me some very thoughtful answers on the topic. Make sure to check out his wide-ranging list of informative websites.

How you think the evolution of digital media has affected food writing?
It’s changing everything because writers today also have to be photographers, film makers and reporters as well as writers, so they are no longer simply cyphers through whom info passes; they make the news as well as reporting it. It’s fun.

How has it affected your business in particular?
Our books will eventually translate almost entirely into digital form, because people want them on tablets rather than in a physical form, especially when they are travelling. Extra broadband speed has allowed us to begin to make films and, combined with the decrease in equipment prices, means it is possible for us to make and post films. Twenty years ago it took six people and €100k in kit to make a film: now it takes one person, a camera and a digital editing programme.

What is the situation these days when it comes to actually getting paid?
Good ‘papers pay, bad ones expect writers to work for free, and fees have been cut over the last 5 years. It’s tougher than ever, no question about that.

Is everyone a food writer now?
No, most definitely not. Everyone might think they are a food critic, but the aren’t. Writers write with the voice of experience, research and knowledge, as well as judgement. Most people’s writing on food never gets beyond – “I like this but I don’t like that” – which is why trip advisor et al will all be gone in a few years. That’s not food writing.

Food blogs – are they positive or negative?
Positive, because the best ones are very, very good, and they are a form of cv if you re starting out in food writing. But they need to develop to become multi-media, and they need a very precise aesthetic in order to bring readers back.

Does digital media exist hand in hand with new domesticity/focus on lifestyle?
Yes, because digitalisation allows you to access whatever you want whenever you want it, so people’s lives should become more flexible and, in many ways, that has already happened. This should break down the division between work time/leisure time which exists today. But, the caveat is that people are working harder than ever, and spending longer at work, so they are very slow in embracing what tech can actually do for them. People haven’t caught up with tech, really, and the old work model, which should be long dead, is still alive.

What do you see happening in the future?
Moore’s Law will continue, so speeds will increase along with capacity, and all media will become multi-media. Newspapers will earn revenue from subscriptions, not advertising, which will be very good for newspapers and good for writers. Print will die; you will have the ‘paper/magazine digitally, not via print. With revenue from subscriptions and without printing/distribution costs, newspapers will become extremely profitable. Google et al, with their deep pockets, will begin to buy ‘papers, which will see a lot of antitrust/media ownership struggles ahead.

Where do you find food-related inspiration or information online?
your blog
The Daily Spud
The Feiring Line
Michael Pollan
N Y Times
The Guardian
The Art of Eating
3 Quarks Daily
Food First
Grist
The Daily Meal

Next up: David Kiernan of Kitchen72.com
Aoife McElwain, I Can Has Cook
Food writing in the digital age: Irish Examiner feature