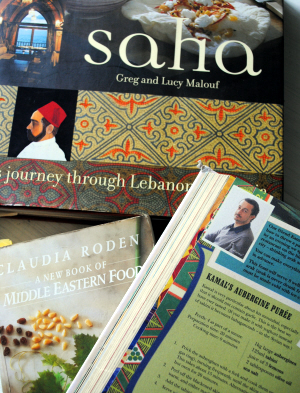 I interviewed Kamal Mouzawak for one of the very earliest episodes of Culture File back in September 2010. This inspirational Lebanese chef and food activist was in Ireland, briefly, visiting the Taste of West Cork food conference to discuss sustainability and food for the future.

He’s had first hand experience of this. In 2004 Kamal had a vision of uniting his divided country through food. Souk el-Tayeb, the farmers’ market that he set up in Beirut has become a place where people – of all backgrounds and beliefs – can come together to share food, feed their fellow countrymen and relish the culinary traditions of Lebanon.

I’ve been fascinated with the food of Lebanon since talking to Greg Malouf at Savour New Zealand and reading his books Arabesque, Moorish and, especially, Saha. As a result, the Kiwi and I were planning a trip there in 2006 but war got in the way and life has been busily intervening ever since.

Then Lebanon came to West Cork.

Kamal and I sat together in a quiet room in the West Cork Hotel as he spoke passionately of how Lebanese food nationalism is about supporting the land, the products and the producers. He pointed out that agriculture and food production is not just something you buy on a supermarket shelf, it is something that someone planted in his garden or cooked in his kitchen.

In a country that has been acrimoniously divided along religious and ethnic lines, Kamal focuses on how the diversity of Lebanon can be a wealth rather than a problem.

Souk el-Tayeb has evolved from a simple farmers’ market into a movement. From promoting direct contact between customers and producers, its role has expanded into organising festivals in the countryside, working with schools to teach sustainable agriculture and developing Tawlet, an acclaimed co-operative farmers’ kitchen that showcases the traditional food of Lebanon. As Kamal emphasised, “tradition is not a book you read” – food is an expression of history and tradition and diversity.

It’s not just a message that can be applied to Lebanon. No matter where we are in the world, food is what binds us to each other, sharing meals an excuse to gather with family and friends, while cooking grounds and connects us during good – and bad – times.

And someday, I know, I will make it to Lebanon and see how food and tradition and history work there.

More Kamal
The Daily Spud visited both Souk el Tayeb and Tawlet, meeting Kamal there, on a trip to Lebanon. Her account of his recent visit to Ireland is here.