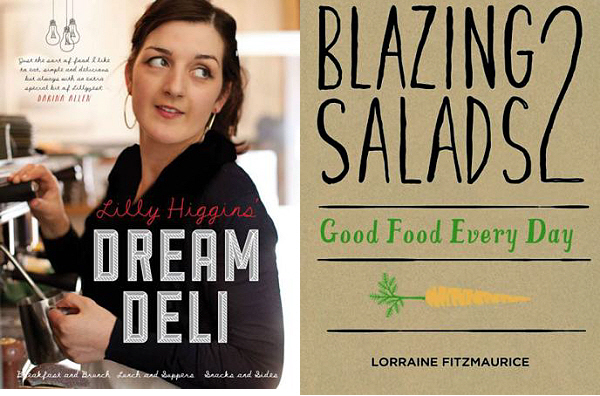 Old school Irish publisher Gill & Mac has been taking cookbook production up a notch in the last few years and both of these hardbook books are lovely to look at as well as to cook from.

If every small town in Ireland had a Dream Deli selling fabulous brunch dishes like Fruit Tabbouleh, Weekend Waffles and Welsh Rarebit, we’d all eat out a lot more. Perhaps it’s best that this doesn’t happen – because instead you can have the fun of cooking your way through Lilly’s book, which includes (my favourite!) inventive devilled egg variations like beetroot and fennel, spiced coriander, wasabi and sesame seed. There are great salads (Mango and Shredded Chicken with Garam Masala Yoghurt, Quinoa with Pistachio and Pomegranate) and an assemble-on-the-spot Sicilian Wedding Cake that could set a new trend. lillyhiggins.ie

While Lilly has yet to set up her deli, Lorraine Fitzmaurice has years of experience under her belt. Along with Cornucopia, her Blazing Salads was one of the Dublin city centre cafés that I used to frequent when I felt most in need of nourishing. Its wholesome cooking always hit the spot then and this lovely cookbook does the same now in my own kitchen. This is good food for everyone, but those who are vegetarian, vegan, gluten- or dairy-free – or cook for them – will find it  particularly useful. In cold weather, the soup chapter goes into heavy rotation and the Green Split Pea and Barley Soup is a stick-to-the-ribs winter warmer. For dinnertime ideas, check out the sections on turnovers, lasagne and hotpots (you must try the Spiced Sweet Potato and Chickpea stew) and know that this is sustenance for body and soul. www.blazingsalads.com

Buy for: the friend who is interested in having their own café or deli, isn’t quite mad enough to go down that path but would still like to test out potential recipes on his or her family. 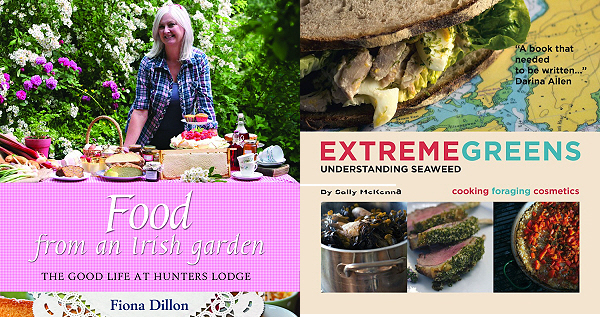 The land and the sea

The books that are more than cookbooks: Food from an Irish Garden by Fiona Dillon (Orpen Press) & Extreme Greens by Sally McKenna (Estragon Press)

Fiona always looks as if she’d be more at home in a pair of fabulous heels than down-at-home wellies but, it hast to be said, she works those wellies so well. Food From an Irish Garden grew out of her Hunters Lodge Living blog, is all about the good life: the basics of keeping chickens, turkeys and bees; growing veg and fruit; making the most of garden and foraging bounty. Whether you have an acre of land to play with or a city apartment balcony, it’s all simple one-step-at-a-time stuff and Fiona emphasises that it should be fun, rather than a wearying chore.  There are some recipes – I found the one for a simple time-saving Rosehip Syrup particularly useful – but this is more a how-to-do rather than a how-to-cook book. fionadillon.com

Popping up in Electric’s Fish Bar green salad , in batter for the fish’n’chips at the Irish Craft Beer  and Cider Festival and on festival walks all over the country, 2013 was the year of seaweed. Sally McKenna’s Extreme Greens made me think ab0ut the slimy stuff I normally avoided on the beach in a different way. I may still do my foraging at a health shop but, after reading through the book and the morning I spent splashing about with Sally for a Culture File feature, seaweed is featuring a lot more in our daily diet. In this well-researched book there are plenty of tips on using seaweed in cooking, gardening, homemade cosmetics and for health – I especially love the carrageenan cough treatment. Read – and listen – more here: Culture File: Seaweed and oysters www.guides.ie

Buy for: the aunt looking for a project in 2014. Along with a pair of chickens – or waders for the real seaweed foraging. 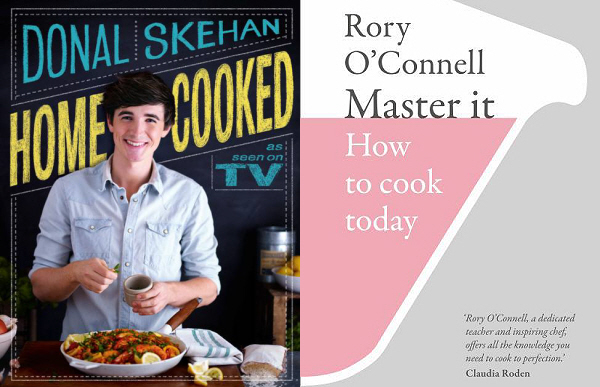 HomeCooked by Donal Skehan (HarperCollins) & Master it: How to Cook Today by Rory O’Connell (Fourth Estate)

Donal Skehan has lots of energy. No one that saw him channelling Bosco in his recent HomeCooked theatre tour – a ballsy move (the tour that was, not behaving like a puppet from the 1980s) – could ever doubt that this lad isn’t firing on all cylinders. It’s that energy and drive, not to mention his way of making it all look so easy – after copious amounts of backstage prep – that is so appealing on TV. And that’s before we even mention his new range of SKOFF pies and the just-about-to-arrive-in-print Feast: A Dinner Journal. Phew…

For HomeCooked, Donal takes flavour inspiration from around the world, with recipes including simple Mexican Fish Tacos, the Pepper Pot Cafe’s legendary Roast Pear, Montgomery cheddar and Bacon Sandwich and a brilliant Asian Beef Stew with Chilli Noodles (already on our family menu rotation). There are also the show stoppers: Brioche French Toast with Berries and Chocolate, a decadent Salted Peanut Caramel Mud Pie and the retro (to go with Bosco?) Mikado Coconut Cream Cake. This is the kind of book that mothers will pick up for their mid-20s living-away-from-home children in the hope that they’ll start eating more than take-aways and cheese on toast. How could they resist? www.donalskehan.com

Last, but so very not least, is this ostensibly simple book from Rory O’Connell. While he may not be as well known as his sister Darina Allen, he is the co-founder and one of the foundation stones of the Ballymaloe Cookery School. A quietly spoken man with a dryly entertaining wit, this former head chef at Ballymaloe House is also an gifted teacher. Anyone who’s ever had the pleasure of sitting in Rory’s classes, as I did in 2007, will hear his measured and precise tones in their ear as they read.

There are no frills and furbelows here; Rory concentrates on technique rather than photographs or food styling. This is the book for an experienced cook who wants to learn why and how, who can see that mastering some key recipes and techniques unlocks a whole world of delicious variations. His Potato Soup with Black Pudding has me elevated to a new role as a soup-making queen and there is a biscuits chapter which begs my greedy interest. A real treasury of recipes honed over years of cooking and teaching. www.rgoconnell.com

I received review copies of Dream Deli, Blazing Salads 2 and Extreme Greens from their respective publishers.