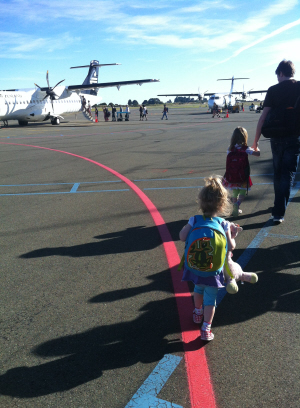 Long haul travel with kids – does it get any easier? Not really, but at least experience helps you to be better prepared! I recently wrote a piece for the Irish Examiner on last year’s trip to New Zealand:

In February, we headed back for a family wedding. Although it was just four flights this time, it took us 52 hours  door-to-door but at least the girls had an extra year under their belts. We flew with Malaysia Airlines and paid full price for everyone over 2 years of age. Yep, that’s four full price tickets. On the plus side, we did get four seats which becomes a lifesaver when you’re trapped in close proximity to your family for 12 hours at a time.

See below for my survival tips – I’ve included things that we learned this year in italics. Last year the girls were 3 and 15 months; this time round they were 4 and 2. We also travelled to NZ and Vietnam when Little Missy was just eight months. Read about our Hanoi visit here: Taking baby steps through Hanoi

1. Clothes: Dress to impress — if kids look cute, they get away with much more. Easy-to-remove light layers are essential as temperatures can vary a lot on planes. For a long trip, per child you’ll need two sets of day clothes, plus pyjamas.
Don’t forget several changes for yourself. You will probably deal with at least one vomiting episode – normally while the Husband is asleep – and a couple of “oops, I forgot to go toilet” while they’re sitting on your lap. You will need clean clothes. Ensure at least one of the changes is suitable for landing in your destination. Last year, we were the idiots freezing our toes off in January, wearing flip-flops when our bags didn’t arrive with us. On the plus side, the suitcases wouldn’t have fitted into the car anyway and Emirates had them delivered to the door 24 hours later.

2. Eating: After the first leg of the journey, when they didn’t have any meal for Little Missy, I confirmed her food at each subsequent check in. She enjoyed the novelty of the kids’ trays but didn’t eat a whole lot. Classified as an infant by Emirates, the then 15-month old Small Girl had no interest in jars of baby food but the tetra packs of baby milk were a lifesaver. Mealtimes rarely seemed to coincide with the girls being awake and/or hungry so zip-lock bags were handy for tray leftovers. Pack some familiar snacks along with a few (low-sugar) treats and their own small bottle of water, which they can suck for takeoff and landing.
Be warned: the children’s meals all seem to come with chocolate. No kid needs too much sugar while trapped in a large metal cylinder so either grab them before the smallies see what’s on offer or order a grown up meal instead. Visually, the children’s meals are more attractive and they got a little puzzle book – anything to pass 20 minutes on a 12-hour flight. Their favourite meal on Malaysia Airlines? The coconut rice with breakfast time nasi lemak.
Food to bring: small boxes of raisins, oatcakes, rice cakes, carrot sticks, clementines. A few treats which they’d never get at home.
Because we had overnight stop overs in motels, I also packed a couple of tubs of instant porridge, which was a life saver, as were a a few herbal teabags.  A couple of small bars of dark chocolate are a great morale booster for adults. And a few other things…(see below)

3. Sleeping: There’s no point in trying to stick to any kind of schedule. Let the kids sleep when they will and grab some shut eye for yourself at the same time. Otherwise the small people aren’t the only ones who will be having meltdowns.

4. Activities: Emirates’ touchscreen entertainment system was easily manageable for LM but impossible to watch with SG who was irresistibly attracted to changing channels. The airline was also good at supplying kids’ blankets, toys and magazines.
Malaysia Airlines wasn’t quite in the Emirates class but – hey! – it was (relatively) cheap. And we didn’t have to do a five-flight marathon to get there, or stay an unexpected (although very pleasant) night in Dubai on the way home.

Both girls had their own backpacks this year, which meant about three months of prior packing for them. I unpacked five heavy books, three dolls and about a dozen dolls outfits from LM’s bag. The cat narrowly escaped being added to the assortment. Just bear in mind that you may be carrying these bags, along with a sleeping child and your own bag(s) so make sure they’re not too heavy.

A note on pushchairs/buggies: we always travel with one that is light and easily folded up. This year we checked it in with the rest of the luggage in Ireland and collected it in Auckland. Coming home, we took it to the gate in Auckland and collected it in KL for our stay there. The following night, we took it to the gate in KL, gratefully picked it up in Heathrow – so many queues in that horrible airport that you desperately need something for kids to sit down on – and re-checked it at the Aer Lingus gate. London aside, airline staff in Auckland and KL were incredibly helpful.

In terms of carry on luggage, we’re discovered that each adult needs:
1. a small wheely suitcase to go in the overhead locker
2. an over the shoulder bag that fits under the seat in front

And, to the very helpful Englishman who said “you’re travelling light, ha ha” when we were only half way there, dazed with exhaustion and trying to keep two girls from killing each other,  if you don’t have something useful to say, just keep quiet. Or, with seat selection luck, you may end up sitting next to us.

5 Visas: Make sure you know where they are needed. The girls and I — all on Irish passports — needed visas to leave Brisbane airport, even for 5 hours. This is easily sorted online but needs to be done in advance.
Our overnight in Kuala Lumpur, Malaysia this time round was much easier as no one needed visas – and we got to hang out with family there, eating lots of great food and making full use of the enormous playground at KLCC Park.

Most importantly, think of the end result. Family. Friends. Lots of good food and coffee. It’s always worth it.