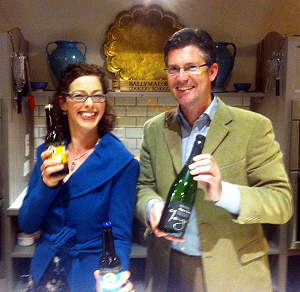 Bottles at the ready for Savour Kilkenny

Writing a book takes you down many different roads – and many of them, fortunately for us, lead to the fabulous festivals that are taking place around the country.

Last weekend, Kristin and I took Sláinte to the Dingle Food Festival where we held a workshop on food and Irish craft beers and cider in the little Dingle courthouse. I was seriously tempted to take the judge’s seat but, it being set above and apart from the rest of the courtroom, it wasn’t going to make pouring samples easy.I was ruled out of order, had to abandon my search for a gavel and stay on the floor in front of the jury/the workshop participants. Their verdict? Fortunately they found in our favour!

A Nationwide special on Irish craft beer and cider – who would have thought that would happen just a couple of years ago! – set the Twitter machine a-buzz on Monday, with a significant amount of coverage for September’s Irish Craft Beer and Cider Festival at the RDS and Metalman’s Grainne and Tim. We were also excited to see the book featured on the show, first spotted by eagle-eyed Aoife. The show is available to watch online here: Nationwide

Last night I was back at Ballymaloe Cookery School, where I studied in 2007, to talk to the current class of certificate students about beer, brownies and the book, bringing along a few samples from Eight Degrees. Just for illustrative purposes, don’t you know. And, perhaps, a little tutored tasting.

On the blog: Ballymaloe Day 25 – “You could knock out the whole of Munster with that!” http://t.co/r7ORIE66q3 pic.twitter.com/2gElPRAzTL

Next up for Sláinte is Savour Kilkenny where Colm McCan, Ballymaloe wine lecturer who also works with Le Caveau, and I are getting serious (ahem) about our beer and cider vs wine smackdown. We’ll be in the Kilkenny Leader Partnership Marquee at 2pm on Saturday and Sunday, October 26 and 27, pairing our respective beverages with local foods – and asking you what you think works best! Check out the programme here – we’re on p13. Unlucky for some, I’m thinking, Colm!

In mid-November, you’ll find Kristin and myself at the Dublin Book Festival‘s Winter Garden talking and tasting a selection of Irish craft beers and ciders. That’s on 16 November and there’s more information and booking details here:  Craft beer and cider tasting with Kristin Jensen and Caroline Hennessy

There are other fun things in the pipeline and we’ll keep you updated as they’re confirmed. Sláinte!

Some comments on the book:
“Not just a guide, but rather the perfect reference book, Sláinte combines beer matching, recipes and history for a concise piece of writing that’s executed using layman terms…” 4 October – Úna-Minh Kavanagh, Spill The Beans
“The book also contains a score of superb recipes, collated from various Irish food writers, including Caroline Hennessy’s own recipe for Double Chocolate Porter Brownies which are, hands down, the best brownies I have ever tasted.” 23 September – John McKenna, The Irish Times
“A go-to guide for anyone interested in the burgeoning Irish craft beer industry.” 20 September – Donal Skehan, The Irish Independent
“For a comprehensive update on who’s making Ireland’s best cider, take a look at a new book, Sláinte: The Complete Guide to Irish Craft Beer and Cider, by Caroline Hennessy and Kristin Jensen.” 10 September – Marie Claire Digby, The Irish Times