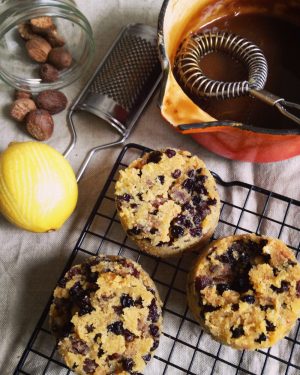 Using a computer? Listening to a digital radio? About to search the internet? Bookmarking a dinner recipe that you’ll be weighing on a digital scale?

Your life is touched every day by Boolean algebra, which was developed in the 19th century by mathematical genius, philosopher and logician George Boole and which has played a central role in the development of electronic digital computers.

Today – 2 November – University College Cork celebrates his 200th birthday and, as part of that, food and culinary historian Regina Sexton has delved into the archives to make him a birthday treat.

I loved the idea of going from algebra to baking and I couldn’t resist this pudding, which I made for Lyric FM’s Culture File programme.

Want to taste it for yourself? You can find Regina’s recipe on the UCC website (Recipe for the George Boole College pudding ) and more about the Boolean celebrations at georgeboole.com

I really enjoyed these little puddings, which were just the thing to cheer up a damp and dreary day. The flavours and aromas reminded me so much of Christmas pudding, that I couldn’t resist trying a second variation using some good Cork stout.

George Boole College Puddings, Cork style
I used Knockmealdown Irish stout from Eight Degrees Brewing here but try it with your own local stout or porter to give it your own twist. I think that it would also be fantastic with an imperial stout or spiced winter ale. Serves 4

Preheat the oven to 180C (160C fanbake). Butter 4 x 250ml ramekins or pudding bowls and place them in a roasting tin. Boil a kettle of water.

In a small saucepan, simmer the raisins with the first measure of stout for about 4-5 minutes, until they absorb it and plump up.

Meanwhile, make the sponge fingers into crumbs – I used the old technique of putting them into a strong plastic bag and battering them soundly with a rolling pin.

Tip the crumbs into a large bowl, adding the flour, baking powder, sugar and nutmeg. Mix in the plumped-up raisins and candied lemon peel.

Whisk the egg, stout and melted butter together, pour into the dry ingredients and mix gently. Divide between the prepared ramekins. Pour 2cm of hot water carefully around the ramekins in the roasting tin and bake in the preheated oven for 30-35 minutes, or until well risen, firm and a skewer comes out clean.

Allow to cool for a few minutes in the ramekins before turning out and serving warm with custard or a caramel ale sauce, made with the rest of the stout. Just use what’s left in the bottle don’t reduce it as much. You won’t need the salt.

Adapted from Regina Sexton’s recipe for George Boole College Pudding. You’ll find the original here. Both are well worth making, whether you’re celebrating George Boole’s birthday or not!