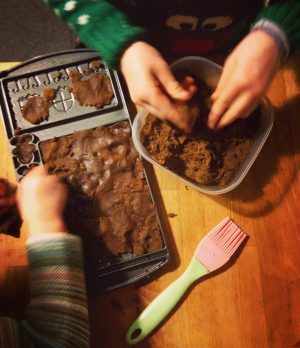 Here we go again: the start of Gingerbread House 2015

First published in the Nov-Dec edition of Image Interiors & Living.

In 2011, with a small baby in my arms and toddler underfoot,  I decided that the one thing that would make Christmas complete was a gingerbread house. A nice project to do with two-year-old Little Missy, right?

There were mornings making – and eating – the spicy dough, afternoons with the oven on full blast to bake the pieces and several tantrums (mine) closely averted with dollops of royal icing. But we got there in the end, Little Missy and I, with a slightly wonky (and occasionally tooth-marked) gingerbread house.

Did I learn from the experience? Not enough, for I’ve repeated it every year since with my pair of growing-up girls, pulling out the baking mould at the start of December and completing the painstaking assembly, icing and decorating (note: luridly coloured liquorice allsorts are the sweets least likely to disappear during the decoration phase) just in time for it to be broken into and devoured on Christmas Eve.