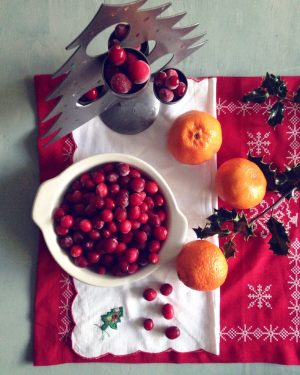 Fresh cranberries, those gloriously red, bouncy berries – ever dropped an open pack on a tiled kitchen floor? – are now synonymous with Christmas, but it wasn’t always so. In Ireland during the 1980s, the only cranberry you might come across had been preserved within an inch of its life into a jelly-like substance that was sold as cranberry sauce.

Too solid to actually sauce anything and cloyingly sweet, it was one of those mysterious jarred condiments, along with mint sauce and redcurrant jelly, that appeared once a year on the table at my grandparents’ house – and then went back into the pantry for another 12 months. I was not a fan, until I discovered Darina Allen’s recipe in her 1989 book A Simply Delicious Christmas, tracked down fresh cranberries and made it myself.

I haven’t missed a year since. Now, although I’ve wandered a long way away from the Ballymaloe original, Christmas isn’t complete without my own version of cranberry and orange sauce. It takes just ten minutes to make and beats anything that you’ll find in a jar, allowing you plenty of time to read this selection of Irish cookbooks for Christmas. Lots of inspiration for 2016.

With my food-splattered eighties book falling apart at the seams, I was delighted to see that Darina Allen’s A Simply Delicious Christmas (Gill & Macmillian) was re-issued last year in a gorgeous new hardback format. It’s an essential part of the seasonal kit, with lots of traditional recipes  alongside things like salads with smoked Gubbeen, pearl barley and pomegranate, pickled pears and panettone bread and butter pudding.  Give to: Irish mammies, of all ages.

Trish Deseine’s Home: Recipes from Ireland (Hachette Cuisine) is a celebration of Irish food, producers and chefs. Beautifully photographed, it’s one of those rare books that can sit just as happily on a coffee table as in your kitchen. Well worth subbing an Irish craft stout for the Baileys Chocolate Cake. Give to: a friend who doesn’t believe that Ireland has a food culture.

After watching Fiona Uyema‘s first ever cookery demo, on making sushi with kids, at Savour Kilkenny’s 2012 Food Camp. I went off and bought all the paraphernalia; her Japanese Food Made Easy (The Mercier Press) might just be the book to make me actually use it! Her recipes are refreshingly simple and tasty and something like her chicken and spring onion skewers – Negima Yakitori – are a real crowd pleaser. Give to: someone who feels stuck in a kitchen rut.

Coast: Recipes from Ireland’s Wild Atlantic Way (HarperCollins) from Rachel Allen is an eating tour of Ireland that showcases all the great food that you can meet en route. Plenty of recipes for the stay-at-homes too! Try her sausage and bean casserole with kale and hazelnut pesto. Give to: the vicarious traveller, along with a copy of John & Sally McKenna’s Where To Eat and Stay on the Wild Atlantic Way (Estragon Press).

Donal Skehan‘s Fresh (Hodder & Stoughton) is just what you’ll need to fulfill your New Year healthy eating resolutions. There aren’t too many outlandish ingredients; instead it’s new permutations on store cupboard favourites, like roasting tinned chickpeas or using peanut butter in brownies. The harissa baked eggs and semolina pancakes are on my weekend brunch list. Give to: the newly health conscious Little Brother

If you need to give your diet a complete overhaul, Susan Jane White‘s The Virtuous Tart (Gill & Macmillan) will put you on the right path and make you love it. Written in her trademark tongue-in-cheek entertaining style, she’s as at home riffing on Leonard Cohen flapjacks and born again truffles as telling you how to brew your own kombucha. Give to: anyone who’s interested in becoming a virtuous tart.

I’m a long-term Diana Henry fan and her A Bird in the Hand (Mitchell Beazley) is the perfect thing to have in the kitchen for those times you have a pack of chicken bits in the freezer and no inspiration. Mexican griddled chicken, chicken legs in pinot noir, chicken, leek and cider pie – you’ll be spoilt for choice. Give to: the chicken-lover in your life.

Not cookbooks – although each book includes a recipe – but Fiona Dillon’s Freddy Buttons (Orpen Press) series is a colourful and entertaining set of books for kids that any food-loving adult will also enjoy. An eight-year-old boy that lives in Tumbledown cottage and has outdoor adventures with his animal friends, while eating lots of good food, he’s become a great favourite with my four- and six-year old girls. Give to: smallies who enjoy good stories and illustrations.

Cranberry and orange sauce
Want it plain? Then just use 200ml water and skip the orange juice/rind. Or go the other way and add 2 tablespoons of port in with the sugar! Makes about 600g or enough for decent helpings on Christmas dinner and to brighten up lots of leftovers.

Rinse the cranberries and put them into a saucepan with the orange rind. Measure the orange juice and make it up to 200ml with water.

Bring to a boil over a moderate heat then simmer for about 5 minutes, until the berries burst. Add the sugar and stir until it has melted, simmer gently for 2 minutes then remove the pan from the heat.

Allow to cool slightly before pouring into warmed jars or straight into a serving bowl. This keeps in the fridge for 1 week or can be frozen. Bring to room temperature before serving.