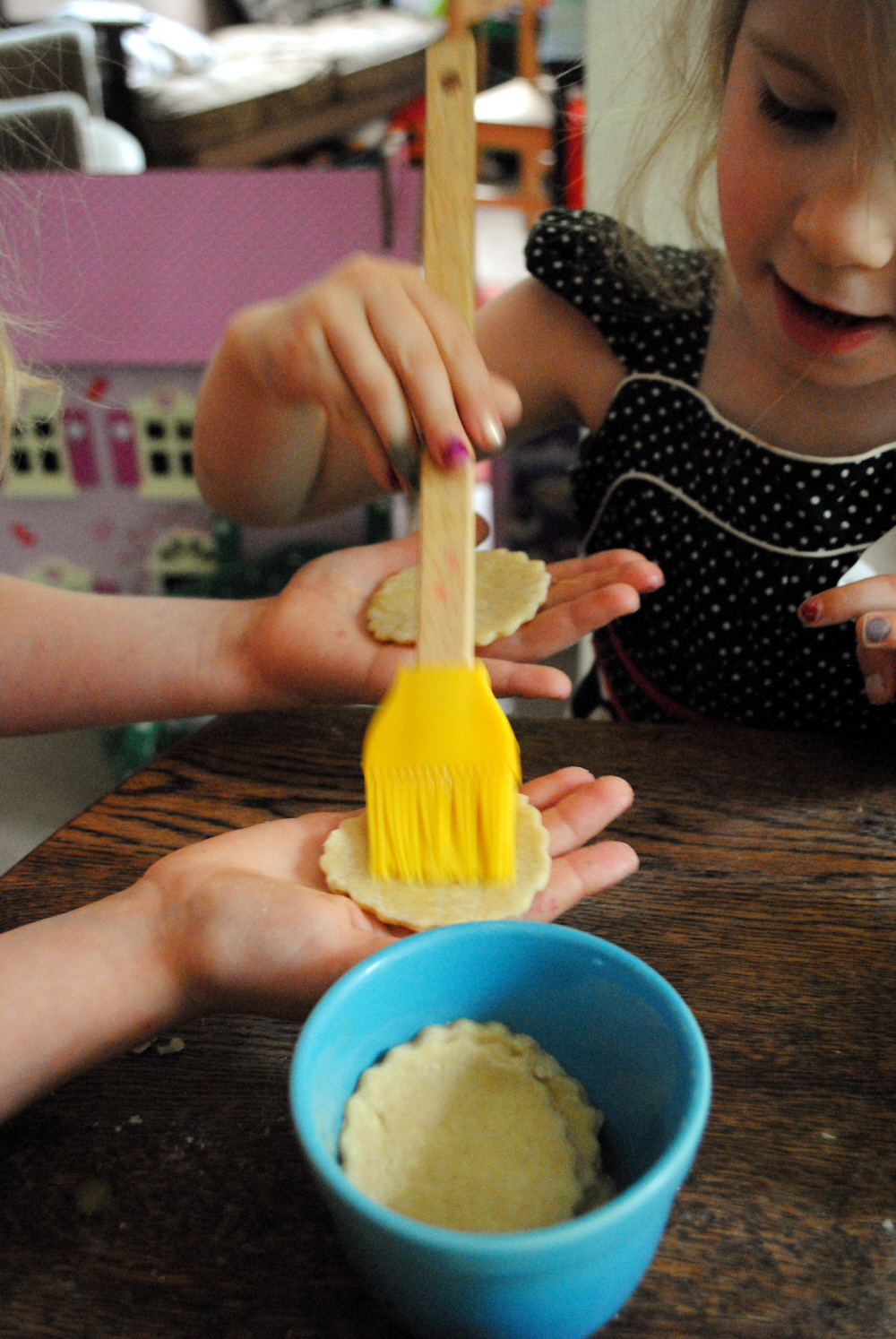 This was first published in the Irish Examiner on Wednesday, 10 August 2016 but – as I got so carried away when writing about fabulous fictional food in children’s books! – there wasn’t quite enough space for all the text. Still to come: Part 2 with The Hobbit and Matilda.

Long summer holidays are all very well when the sun shines and we can be outdoors in the garden chasing kittens and picking raspberries. But, when the wind changes, Mary Poppins-style, bringing rain and a general air of grumpiness, it’s worthwhile having a few tricks up your (warm jumper) sleeves for occupying smallies.

I was a voracious reader as a child. Back in the 1980s, with limited exposure to the world outside the small country town where I grew up, I was fascinated with the different foods mentioned in books and enjoyed vicariously joining in Enid Blyton’s midnight feasts (condensed milk! Sardines! Ginger beer!), Milly-Molly-Mandy’s jam tart making activities and having kaffee und kuchen with the Chalet School girls.

It wasn’t always vicarious. After encountering a spiced apple cake in one of Alf Prøysen’s Mrs Pepperpot stories, I landed most of the contents of the spice rack – dried cloves, cinnamon, ginger and mixed spice – into the next Saturday morning tart, much to my mother’s surprise. I’ve never forgotten that fun of experimentation, of taking an idea from a book and turning it into something that we all could eat.

Now, with two small girls of my own – seven-year-old Hannah and Maya, who’s four – I love the time we spend time reading and rediscovering new and old favourite storybooks. I read them with one eye on the kitchen, always looking for ideas that can inspire a bake or a meal. After reading Helen Cooper’s Pumpkin Soup, we made vats of the stuff, Alfie Weather by Shirley Hughes is full of keeping-smallies-entertained ideas and his pastry star-making has inspired several wet-afternoon cooking events. I’ve also been known to quote Dr Seuss’s Green Eggs and Ham at young ladies who need encouragement to taste and try new things (although I have to admit that they were not huge fans of my “green eggs”, aka spinach pancakes).

From chocolate éclairs to finish off a splendid meal (Harry Potter and the Philosopher’s Stone), sticky molasses pies for a What Katy Did picnic or even Mog’s hard-won boiled eggs, there’s endless kitchen inspiration and fun in children’s books. Summer ’16 – it’s the summer of fabulous fictional food from children’s books. 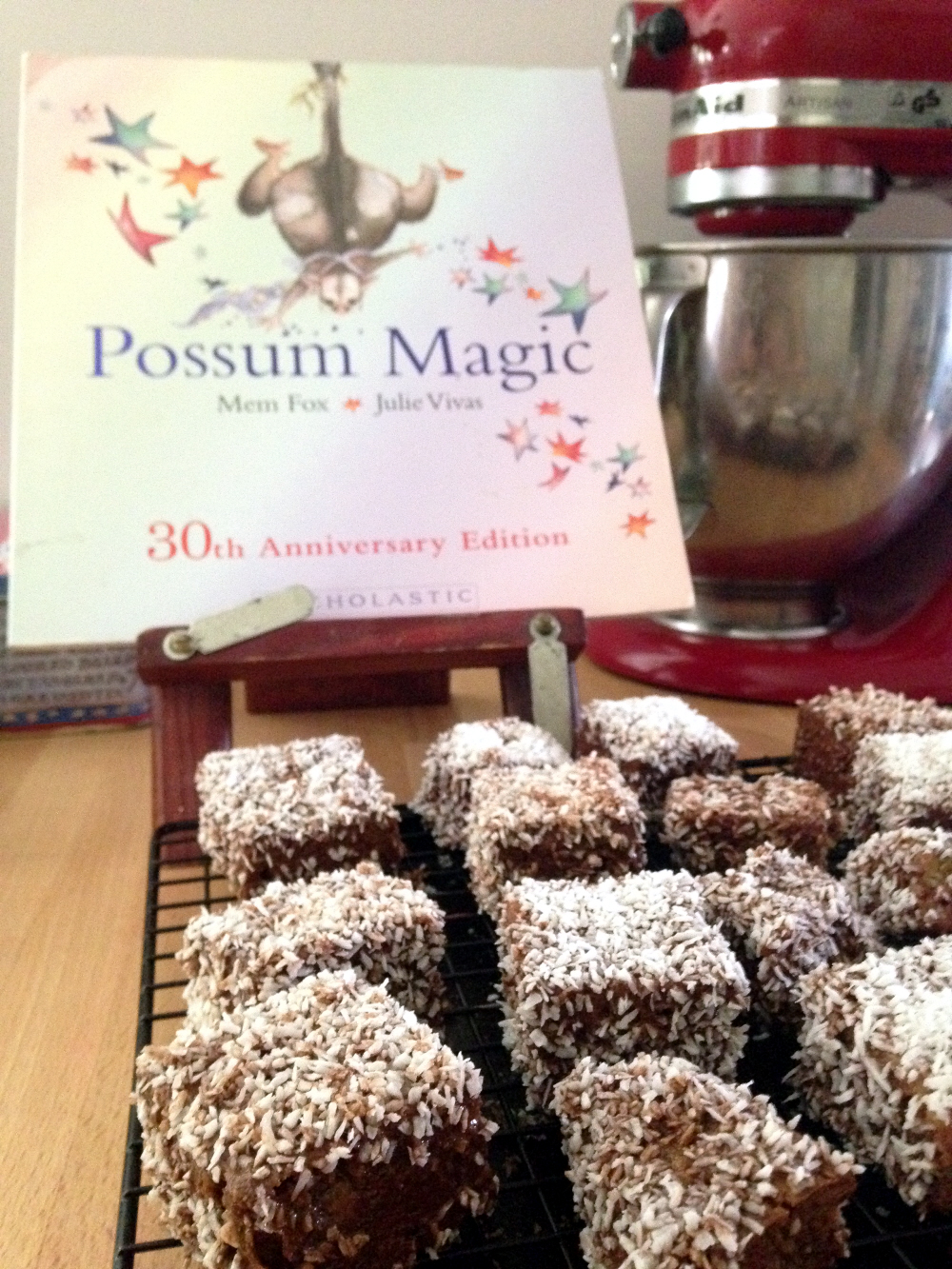 Possum Magic by Mem Fox
“In Hobart, late one night, in the kitchens of the casino, they saw a lamington on a plate. Hush closed her eyes and nibbled. Grandma Poss held her breath – and waited.”

A gift from Irish cousins in Sydney, Possum Magic is a thirty-year-old, bona fide Aussie classic. We were charmed by this picture book story of two possums, Hush and Grandma Poss, who leave their bush home to find a cure for Hush’s invisibility by of eating iconic Australian foods. After Hush became visible again, there was a wondering question from the small, sleepy listeners: “what is a lamington?” “Strewth!” said our semi-resident Aussie the next night when we put a plateful in front of him. Aussie classics.

Hush’s Lamingtons
Normally these are made with a lighter sponge cake but I prefer this variation as they’re less likely to fall apart when you’re doing the chocolate dipping and coconut rolling, especially when you have small hands helping. Makes 20.

In the Night Kitchen by Maurice Sendak
“So he skipped from the oven & into bread dough all ready to rise in the night kitchen.
He kneaded and punched it and pounded and pulled till it looked ok.
Then Mickey in dough was just on his way.”

Best known for Where the Wild Things Are, Maurice Sendak is also the author and illustrator of the dream-like In the Night Kitchen. There’s a brilliant read-aloud rhythm to the story of Mickey, a little boy who falls out of bed – and his clothes – through the dark and into a kitchen where three cooks are busily baking. Your own little cooks will love the opportunity to shape their own plane, Mickey-style, from a simple bread dough.

Mickey’s bread rolls
This is a basic, good natured dough that will take a good deal of punishment and lots of variations. You can also take it in a Frances Hodgson Burnett direction by kneading in some dried fruit for Sara’s currant buns (A Little Princess) or bake it in a loaf tin to make Dickon’s bacon sandwiches (The Secret Garden). Makes 12 rolls.

Put the flour, yeast and salt into a large mixing bowl and mix well with a wooden spoon. Make a well in the centre, pour in the water and oil and, using your hands, mix to a dough. Use a little more water if the dough is very dry. Turn out on to a lightly floured surface and knead for about 10 minutes until satiny smooth.

Place into a clean, oiled bowl, cover with a damp tea towel and leave to rise until doubled in size – about 2 hours at room temperature. Knock back the dough by tipping it on to a floured surface and gently pushing the air out. Divide into 12 pieces and let the children at them while you lightly flour two baking trays.

When they’re finished shaping, put the rolls on a baking tray, cover with a clean tea towel and set aside for 30-40 minutes, until almost doubled in size. If the dough has been particularly well worked, it may take a little longer.

Preheat oven to 200C and bake for 15-20 minutes until golden brown and well risen.

Loved writing this feature on getting cooking inspiration from kid’s books, which is in today’s @Irish_Examiner. Myself and the girls had *lots* of research to do ie sitting down with their books and picking out food for us to make. Well worth doing with your own smallies. Books featured: In The Night Kitchen, Roald Dahl’s Matilda, Possum Magic & The Hobbit. #InTheNightKitchen #RoaldDahl #PossumMagic & #TheHobbit #kidsbooks #kidsinthekitchen #summertimekids #summer2016 #Irishsummer #irishsummer2016 #cookingthebooks #cookingfromscratch #childrensbooks #lovemyjob