First published in the Irish Examiner on Wednesday, 10 August 2016.

As the feature I submitted was a little longer than necessary (it was the recipes, honest!), I’ve broken it into two for the blog. Part 1 – with Hush’s Lamingtons from Possum Magic by Mem Fox and Mickey’s Bread Rolls inspired by In the Night Kitchen by Maurice Sendak – is here.

To be honest, I so loved writing this piece that it could have been pages longer! Mixing kid’s books and cooking is such a fun and evocative thing to do. My original title was Chocolate cake, condensed milk and currant buns – all the foods I loved reading about myself as a child. Researching and writing the article was a real return to childhood, with the advantage of having two small ladies to encourage experimentation.

The Hobbit by JRR Tolkien
“”And raspberry jam and apple-tart,” said Bifur. “And mince-pies and cheese,” said Bofur. “And pork-pie and salad,” said Bombur. “And more cakes-and ale-and coffee, if you don’t mind,” called the other dwarves through the door.”

If you were brought up on the best of British children’s books, pork pies were a constant feature, whether it was at a midnight feast with the twins at St Clare’s: “If you will feast on pork-pies and sardines, chocolate and ginger-beer in the middle of the night, you can expect a dose of medicine from me the next day,” or as a handy one-hand-on-the-tiller kind of meal in Arthur Ransom’s We Didn’t Mean to go to Sea and Coot Club. While we’re not exactly at The Hobbit reading stage just yet, Bilbo Baggins’ larder has always struck me as a thing of beauty – just look at what he could pull out of it at a moment’s notice for an unexpected party. 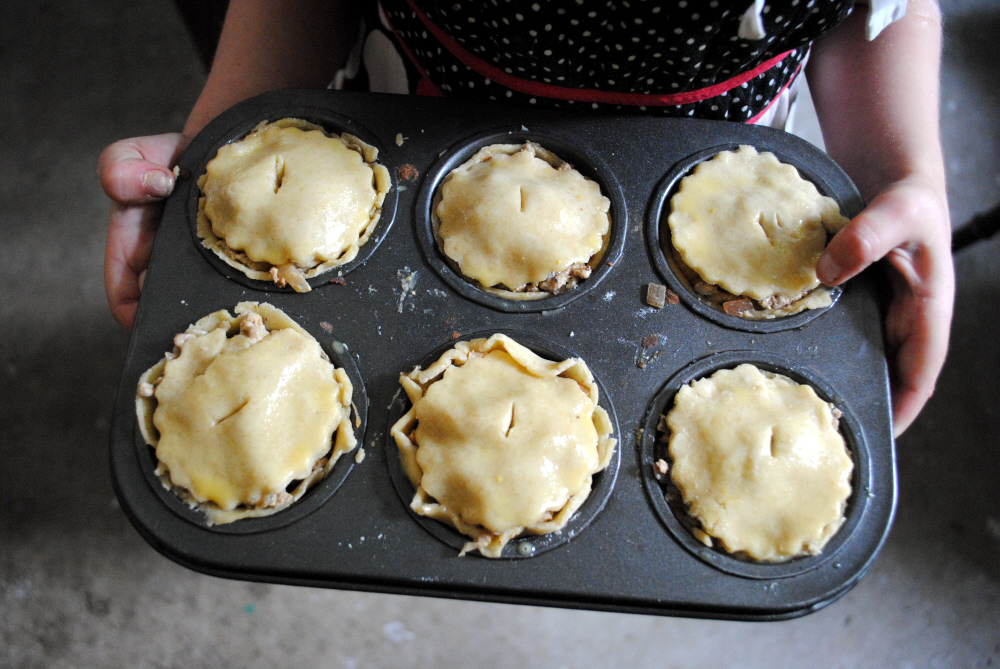 Bilbo’s Pork Pies
These, in their defense, are not classic pork pies but I’ve always thought of Bilbo as being a dab hand at shortcrust pastry and they are nicely hobbit- (or child-) sized. Makes 12.

Heat a dry frying pan over a medium heat. Fry the pork, chorizo and onion for about five minutes, until brown. Remove from the heat and add the thyme, apple, chutney and crème fraîche. Season and cool.

Pack the pork tightly into the pastry cases. Brush the lids with beaten egg and place on top, egg side down. Press pastry edges together to seal. Brush the tops with more eggs and cut a steam hole in the middle of each pie.

Bake for 22-25 minutes until the tops of the pies are golden and the base, when carefully eased out of the tin, is also brown. Loosen the pies while they are warm, remove from the tin and allow to cool fully on a wire tray. Serve with a green salad, Bombor-style. 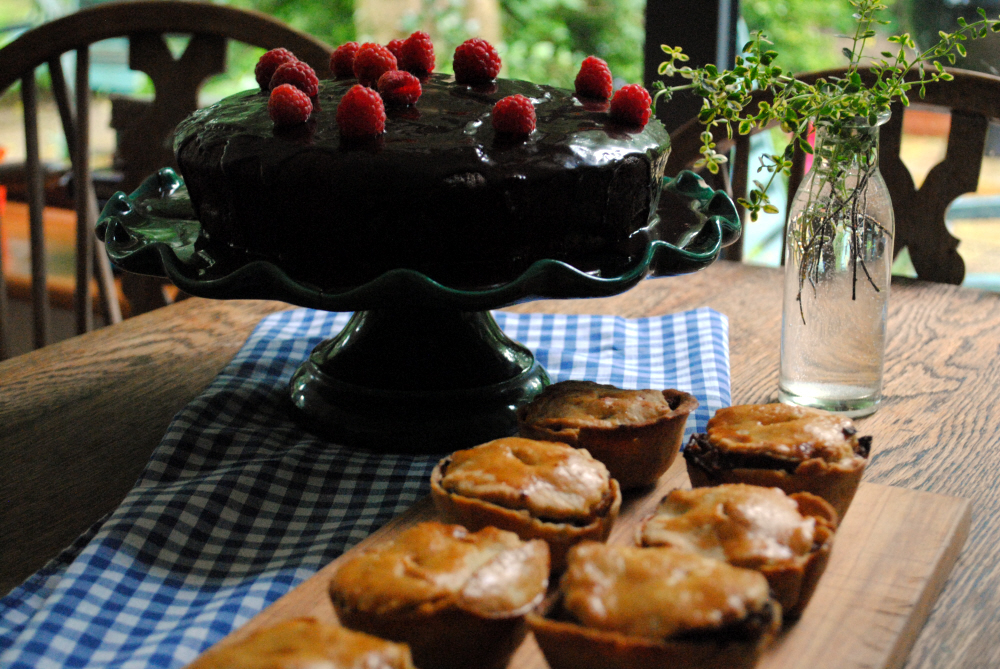 Matilda by Roald Dahl
“…an enormous round chocolate cake on a china platter. The cake was fully eighteen inches in diameter and it was covered with dark-brown chocolate icing”.

We’re going through a bit of a Roald Dahl phase at the cottage at the moment, alternating at bedtime between Matilda and The BFG. They’re both hits but the girls were especially taken with the Bruce Bogtrotter episode where, as punishment for eating a slice of the Trunchbull’s “private chocolate cake…made from real butter and real cream,” he has to eat an entire cake in front of the school assembly. Dahl’s books are full of strange (snozzcumbers, anyone?), disgusting (stink bug eggs) and, occasionally, scrumptious (anything in Charlie and the Chocolate Factory) dishes that can be a challenge to create at home but when seven-year-old Hannah wondered what Bruce’s cake tasted like, we had to try it.

Bruce Bogtrotter’s Chocolate Cake
It’s not quite 18 inches wide but this cake is still tempting enough to make any wannabe Bruces want to snaffle a slice. Serves 8-10

Preheat the oven to 160C. Butter and line a 23cm springform tin.

Place the cocoa and dark chocolate into a small bowl. Carefully pour over the boiling water, allow to stand for a few moments, then stir together until smooth. Small children are particularly good at this.

Sift the flour, baking powder, bicarbonate of soda and salt together. Set aside. Using an electric whisk or stand mixer, cream the butter and sugar together in a large bowl until pale and airy. Add the eggs, one at a time, mixing well between each addition. Add the chocolate-cocoa mixture and mix again. Tip in the yoghurt and dry ingredients. Gently mix everything together then scrape the cake batter into the tin. Bake in the preheated oven for 50-55 minutes, until a cake tester comes out clean.

Cool for 10 minutes on a wire rack then remove the tin. Allow to cool fully, while you make the icing.

Heat the cream in a saucepan until it is scalding hot. Off the heat, add the dark and milk chocolate. Allow to stand for 2 minutes, then stir until smooth. Allow to cool and thicken.

Put the cake on a serving plate or china cake stand. Pour and spread the icing over the entire cake. Scatter raspberries on top. Try not to eat it all at once.