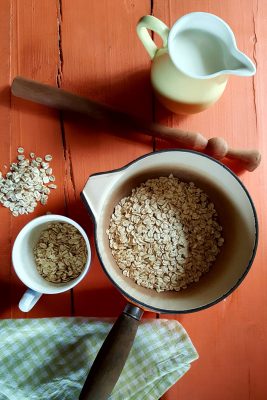 Both my sisters had the same reaction to my first-morning-in-London plan to visit a spot in Neal’s Yard called 26 Grains while we were eating our way around the city this summer. They’re younger than me, get up later, have no kids and, half the time, don’t bother with breakfast. For me, it’s one of my favourite meals of the day, always worth sitting down to savour.

One moment of peace amidst the chaos of a school, “where-is-my-shoe/homework/coat/hurley/bag” morning.

They humoured me (that time); we headed straight for my café but – alas – discovered that it had shut down for August. Happily, the dinky little Salad Pride next door did a cracking coconut breakfast bowl instead. The sisters weren’t entirely convinced that they needed a vegan start to the day but, after just one taste, they came round rapidly.

It was just one in a selection of seriously good breakfasts during that trip – devilled kidneys at St John Bread & Wine, avocado toast at The Breakfast Club – but, for me, the morning was properly made when I had my porridge. Never was a bowl more welcome than when we got to Leon in Spitafields after a 3am start, to enjoy their “porridge of the gods” offering, topped with grated chocolate and slices of banana.

Long before posh or superfood versions became popular, it was porridge for breakfast at the cottage. Year round, it’s cheap, healthy and comforting and was especially loved in the days before we could afford central heating. Little Missy and the Small Girl were weaned on porridges of many grains; flakes of quinoa, millet, rice and oats were all mainstays in those early days. Now they stick with simple oat porridge, made entirely with milk (it fills them up!) and topped with a drizzle of maple syrup, honey or Highbank Orchard Syrup. My own bowl comes lighter on the porridge so that I have enough room for a selection of seasonal fruit, a palmful of whole almonds for ballast and a crunchy topping of mixed linseed, chia seeds and cacao nibs.

Everybody has their own porridge style. The smallies like theirs fairly dry; for me, it’s no good unless it’s sloshing in plenty of milk. We recently had an elderly Scottish friend to stay and he stood over the cooker every morning, stirring his porridge until it was just the way he wanted it; made with water, stirred with a spurtle, a wooden rod-shaped kitchen tool that’s specifically used for porridge, and eaten with a pour-over of oat milk. Everybody, from 5 to 85, eating their porridge just the way they liked it.

Our mornings, measured out in porridge bowls. 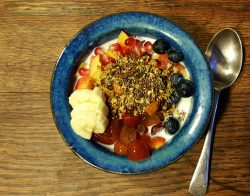 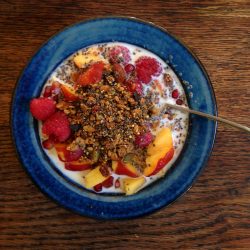 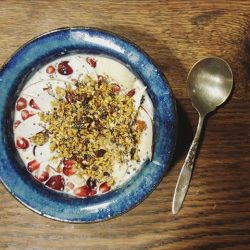 Porridge
Cups – any cups, not just designated measuring cups – are the easiest way to measure first thing in the morning. If I’m half way organised (ha!), I soak the oats in the milk overnight which cuts down on cooking time. Leftovers? Knead them into bread dough for a chewy, moist loaf or whizz them with batter ingredients to make waffles or pancakes with extra benefits. Serves 2.

Put the porridge and milk into a heavy-based pot. Add salt, if using. Warm over a moderate heat. When bubbling, turn the heat down to low and continue to cook for about five minutes or to taste.

Serve with your choice of toppings.

Alex Hely-Hutchinson of 26 Grains has written a cookbook (that’s where she was in August) and it’s well worth getting your hands on. Not just porridge! David Bez of Salad Pride is the author of two picture-driven cookbooks, SaladLove and BreakfastLove. All are now on my shelf. Going to London can be both inspirational and expensive…