An edited version of this feature first appeared in the Irish Examiner on Saturday 15 August 2020.  It was such fun to research and write with my young assistants – I’ve rarely seen them get so excited about a feature that I’ve written! – that we didn’t just stop with the four recipes below. Links to the others at the end of the feature.

No matter what our best intentions were, 2020 has been the spring and summer of screens as parents scramble to WFH while managing homeschooling (ha!), school holidays and children who eat – easily – twice as much as they do while in school.

Early into lockdown, stuck at home and with cinemas on indefinite hiatus, we dug out our unused projector and set up the sitting room for film screening evenings. Now we have a sheet hanging, slightly askew, between the door and a light fitting, while the projector is carefully balanced on top of the stereo. When the popcorn is popped we all – the Small Girl (8), Little Missy (11), the Kiwi and I (older) – line up on the couch for movie nights.

While we initially watched the girls’ choices (anything Harry Potter, even when it’s the 74th time, endless repeats of Shrek), the adult half of the couch quickly decided to be more proactive about our watching experience. Since then we’ve been working through a loose list of recent releases (both the Paddingtons are a cosy joy) and classics from our own childhoods, with more wins than losses for all age groups (Win: Groundhog Day. Lose: The Neverending Story. Just don’t.).

With few kids’ camps available, cinema nights have led directly into daytime holiday activities. Inspired by what we’ve watched, we’ve been working our way through a summer of cooking like the movies, learning new skills and trying different dishes. There’s a lot of spotting food in films that we can recreate easily: “ooh look, meatloaf and mashed potatoes!” was the comment about Back to the Future. Paddington’s marmalade sandwiches weren’t even considered on the grounds that marmalade is “grownups’ jam” but we hit paydirt with films like Spirited Away (sticky rice, always a winner), they demanded Bruce Bogtrotter’s chocolate cake after Matilda and Freaky Friday led to a hunt for fortune cookies.

Here are a few other film and food inspirations. 1. The Secret Garden + Miss Mary’s porridge
Based on the 1911 book by Frances Hodgson Burnett and now coming to our screens in a new film adaptation, The Secret Garden has one of the most disagreeable, opinionated – and unforgettable – child heroines ever committed to celluloid. After the death of her parents in India, sickly Mary Lennox comes to live at her uncle’s Misselthwaite Manor on the Yorkshire Moors. She discovers a magical walled garden, makes friends with cottage child Dickon and rousts her invalid cousin Colin from his bed into life outdoors.

As the children grow in strength, so does their appetite and in the book they share nourishing breakfasts of “home-made bread and fresh butter, snow-white eggs, raspberry jam and clotted cream.” On Mary’s first morning at Misselthwaite she barely glances at her porridge but before long she’s scraping the bowl clean; give your smallies the option of honey or brown sugar and you’ll have a similar result.

Miss Mary’s porridge
Cups – any cups, not just measuring cups – are the easiest way to cook first thing in the morning and perfect for little breakfast chefs. Serves 2.

Put the porridge and milk into a heavy-based pot. Add salt, if using. Cook, stirring regularly, over a moderate heat for about five minutes or to taste. Serve in two bowls with toppings to taste. 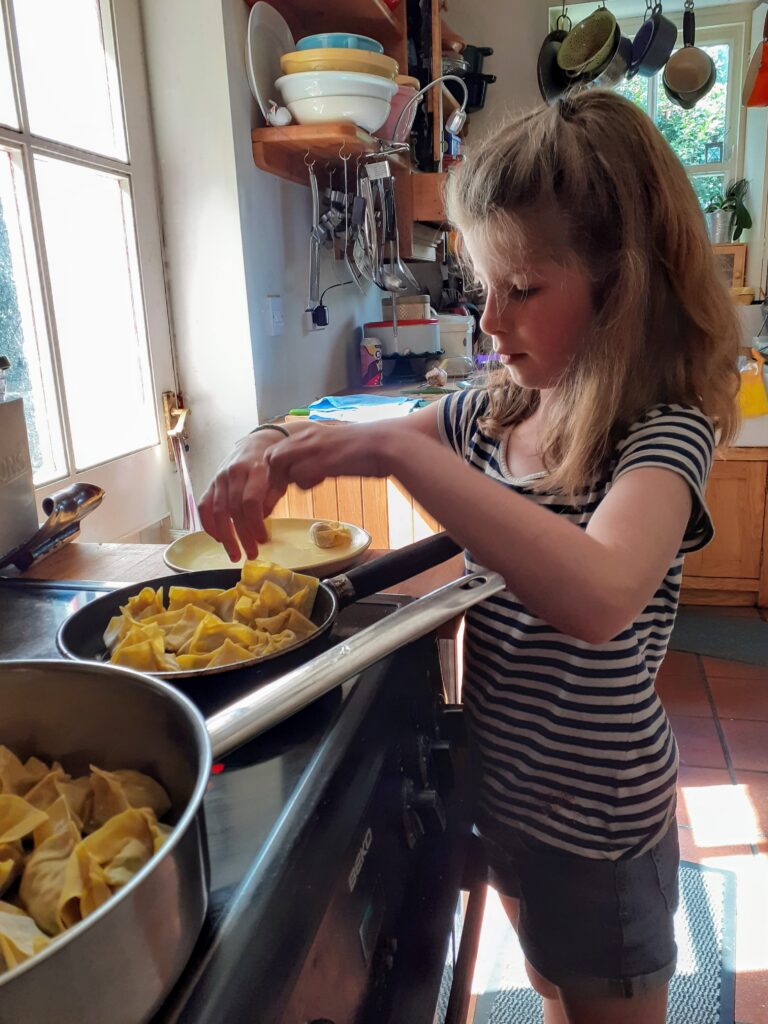 2. Mulan + pork pot sticker dumplings
We had plans to see the new live action Mulan at the end of March but lockdown happened and it, like so many films, has now been postponed indefinitely. Instead, we re-watched the 1998 animation which is based on the Chinese folk story about a young warrior woman who goes to war in disguise as a man. With NZ director Niki Caro (Whale Rider) at the helm we don’t know if there are any dumplings in the new version but, in homage to the original, we made some of our favourites, based on a recipe from Kwanghi Chan.

This is a whole family activity: set up an assembly line of kids to mix the filling, lay out wrappers, fill them, brush the edges with water and pleat – in whatever way can be managed – the edges. There are lots of videos online, including one by Chan, of how you can achieve the best finish: my pair tend to go freestyle, making mini-purses, triangles or random bunches that they have fun identifying when they’re cooked.

Pork pot sticker dumplings
Any time I’m in an Asian supermarket I get a few packs of dumpling or wonton wrappers and stash them in the freezer. Defrost gently overnight in the fridge before use. Recipe adapted from Kwanghi Chan. Serves 4.

Fill a small bowl with water and set it by the wrappers. Lay out one wrapper at a time and place a teaspoon of filling into the middle of the wrapper. Using a finger, wet the edge of the wrapper with water, then fold and pleat until the filling is totally enclosed. Place on a baking sheet until all the dumplings are ready to cook.

Heat a little cooking oil in a heavy based frying pan over a medium heat. Lay the dumplings into the pan in a single layer – this is best done in two batches so that you don’t overcrowd the pan – and cook for 2-3 minutes until a golden crust forms on the base. Pour in 100ml water then cover with a lid. Cook until the water has evaporated and the dumplings lift off the pan easily. Keep the first batch warm and repeat with the remainder.

Eat while warm with chopsticks and a dipping sauce (we like a mixture of soy sauce mixed with chilli and sesame oils for dipping). 3. The Sound of Music + crisp apple strudel
Apples and pastry are definitely our favourite things, especially when we’ve whetted our appetites with an afternoon of Julie Andrews and her Von Trapps singing their way through The Sound of Music’s many mountains as they escape from those dastardly Nazis. The film has just turned 55 but still retains endless appeal for all ages, with plenty of food moments to choose from: chocolate Sachertorte when Maria has her first meal with the family, a mountainside picnic of fruit and cake, schnitzel with noodles or Uncle Max’s beloved strudel. There’s even pink lemonade. And songs everywhere. I defy any child to remain uncharmed.

Crisp apple (and raspberry) strudel
This is far from traditional: we skipped making strudel pastry and stuck with filo and the girls vetoed the use of raisins, subbing in raspberries instead. Serves 6.

Preheat the oven to 190C (170C fanbake). Make the filling by mixing the apples, raspberries, lemon zest and juice, sugar, cornflour and spices together in a large bowl. This is when the kids decide that they want to taste – and almost eat all the filling. Be warned.

Lay a large sheet of greaseproof paper on the worktop and assemble the strudel on top of this. Carefully place the first sheet of filo pastry on the paper and brush with melted butter. Repeat with the rest of the sheets, brushing with butter as you proceed. Spoon the filling along the centre of the filo, fold in the short ends and roll into a sausage shape. Using the greaseproof paper to help, place on a baking sheet, curving the roll into a crescent as you do. Everyone will get buttery. This is part of the fun.

Make sure that you have enough melted butter to brush the top of the strudel, sprinkle with flaked almonds and bake for 35-40 minutes until golden and crisp.

Dust with icing sugar and serve, while still warm, with softly whipped cream.

Break each sausage into 3 pieces and get the kids to roll them into meatballs with damp hands. Heat the oil in a heavy based frying pan and cook for 10 minutes until golden brown. Remove the meatballs from the pan, draining off all but 1 tablespoon of fat.

Tip in the onion and garlic and fry until soft and aromatic. Add the cans of chopped tomatoes to the pan, along with 200ml water. Simmer for 5 minutes then taste and season with a pinch of sugar, splash of vinegar, salt and / or black pepper to taste. Return the meatballs to the pan and cook for a further 10 minutes until the sauce has reduced a little.

Meanwhile, bring a large pan of salted water to the boil and cook the spaghetti until al dente. Drain and divide between four bowls, topping each with a scoop of meatballs and tomato sauce. Serve with plenty of parmesan. 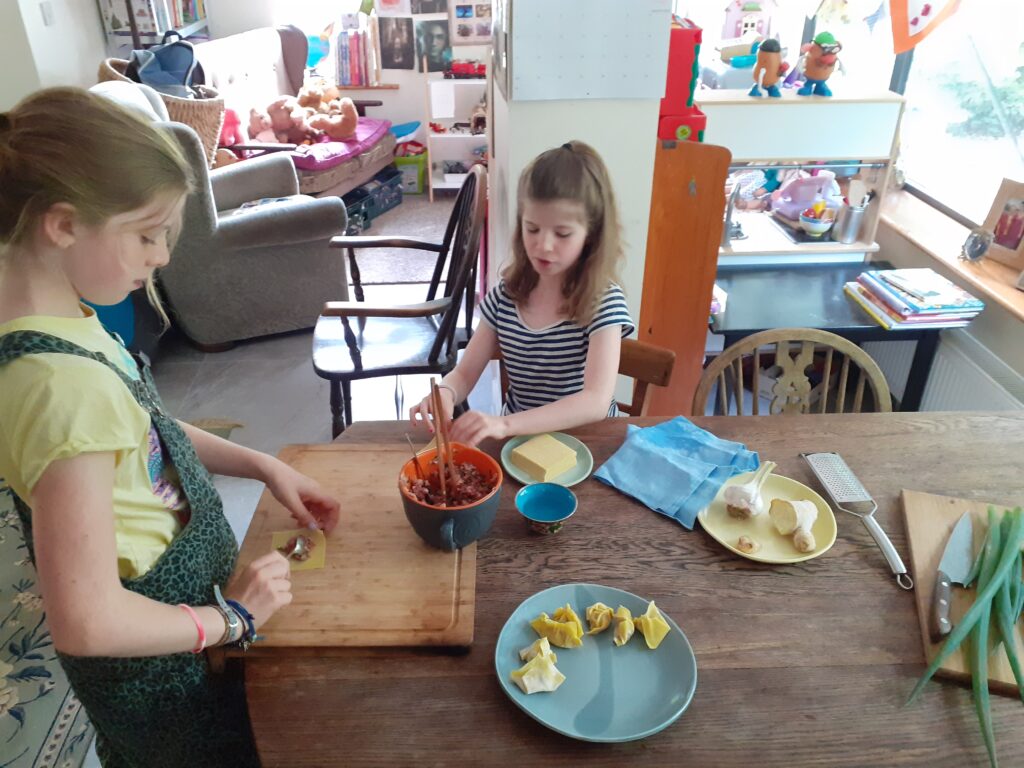