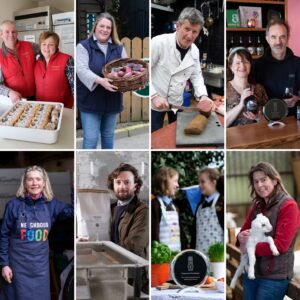 Last year we sat in a restaurant and celebrated the 2020 winners of the Irish Food Writers’ Guild Food Awards; this year we sat at a computer as the 2021 winners were revealed. We could have postponed everything for a year – as many organisations have had to do – but as a Guild we strongly felt that Irish food producers should be celebrated and acknowledged.

Our winners include producers who have brought us comfort during uncertain times – I know I’m not the only one who has appreciated the beauty, flavour (and online accessibility) of Maria Flynn’s Ballymakeny Farm potatoes, all the better when served with a curl of inimitable Abernethy butter melting on top. There’s tradition, with Tom Durcan’s not-just-for-Christmas spiced beef, and stoneground flour and porridge oats grown and milled by James Kelly of Ballymore Organics.

We have innovation from Kate and Denis Dempsey making mead in Kinsale, along with NeighbourFood, co-founded by Jack Crotty and Martin Poucher from a base in Cork but now opening branches throughout the country. There’s looking to the future with the Green-Schools Food & Biodiversity Theme, teaching children in primary schools the essential skills of growing and cooking. We also acknowledge “the cheesemaker’s cheesemaker” Marion Roeleveld with a lifetime achievement award, not only for her wonderful Killeen farmhouse cheese but for her work with other cheesemakers in developing and enhancing the Irish farmhouse cheese world.

It would have been a lovely lunch.

Instead, we decided to celebrate the producers in another way, with a gorgeous online publication. This was edited with care and professionalism by outgoing Chair Kristin Jensen and contains contributions from Guild members Russell Alford and Patrick Hanlon, Ali Dunworth, Aoife Carrigy, Kate Ryan, Roz Crowley, Michelle Darmody, Georgina Campbell and me.

The cover photo was by another member, Imen McDonnell, making this ezine not only a showcase of the 2021 IFWG Food Award winners, but also of the professional skills of Guild members.

We were fortunate to have Ali Dunworth looking after the Guild social media channels for this launch while Aoife Cox made sure that everything has an online home at irishfoodwritersguild.ie.

None of this could have been done without photos and videos from Paul Sherwood, the layout expertise of Jane Matthews and help from PR maestra Rachel Sherry in getting the word out.

This is the very best of Irish food. It deserves celebration.

The winners of the 2021 Irish Food Writers’ Guild Food Awards are:

Thanks to Bord Bia for their ongoing support of Irish food.