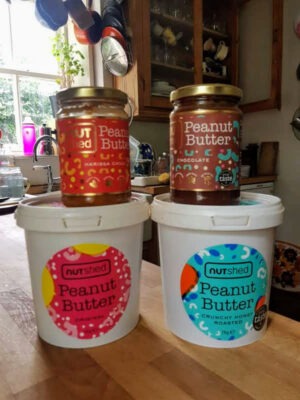 First published in the Irish Examiner on 9 July 2021.

Smooth or crunchy. Sweet or savoury. Spicy or chocolate. Look at the shelves of your local speciality food shop and you can see that there’s been an explosion of artisan, Irish-made nut butters in recent years. For years, peanut butter was something that we experienced vicariously through American TV series and films: That ‘70s Show introduced us to the combination of peanut butter and celery while Brian’s “nutritious lunch” in The Breakfast Club included a PB&J. Peanut butter and jelly was a combination that we just couldn’t get our heads around: “who would want to put jelly on bread,” we asked each other in disbelief, not realising that Brian’s mother was actually using jam rather than the wobbly jelly that we ate with ice cream after dinner on Sundays.

While peanut butter may have been slow to start making inroads into the Irish diet – there was initially a great divide between the super-processed supermarket versions and the health food shop claggy, mouth-coating versions – it’s now firmly here to stay. Maeve Hanan, Registered Dietitian and Director of Dietetically Speaking, gives the trend a thumbs up: “Nut butters are a nourishing (and often satisfying) food to include in a balanced diet – they provide healthy (unsaturated) fat, protein, fibre and a variety of vitamins and minerals including B vitamins, vitamin E, zinc and iron.”

Consuming nut butter is also a great way of getting an extra plant into your meal, says Hanan. “Eating a variety of plants is great for our gut, and you can mix it up by consuming different types of nut butter like peanut, almond and cashew.”

Eliza Ward, who together with her sister Evie set up the Nenagh-based Nutshed back in 2016, remembers the immediate interest at their market stall: “we instantly saw that our customers were really excited by a high quality, creamy, almost luxurious” peanut butter product. Since then, she notes, “the Irish market has changed, people have become so educated in how they like to eat and what makes them feel good. We’ve seen a massive beneficial rise in plant based eating over the last few years and nut butter fits into that.”

Healthy, delicious and now made in Ireland, nut butter has come a long way from PB&J sandwiches or those peanut butter and celery snacks.

Hanan loves their versatility: “They are great additions to porridge, baked oats, smoothies, or toast. Adding nut butter to a snack can also make this more satisfying and filling, for example, apple and pear slices, or dates, with added nut butter…They can also be added to a variety of savoury dishes like stir-fries and satay curries.”

When asked how she uses nut butters, Ward reels off a list that demonstrates how much she experiments with her own products. She likes using peanut butter in hummus instead of tahini, spooning it into soups “to add body – we love curry cauliflower and peanut butter soup” and playing with it in different bakes: “marbling peanut butter into brownies just before baking…mix into cookies…layer into cheesecakes…spoon into banana bread…”

Time to stock up. 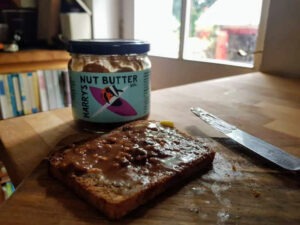 Harry’s Nut Butter
Starting out as the house nut butter in Dublin’s Fumbally Café where the eponymous Harry Colley was cheffing, Harry’s Nut Butter took on a life of its own during last year’s lockdown. The original is sweet, salty and spicy, the extra hot amps up the chilli heat and there’s a coco buzz variety that combines crunchy cacao nibs with peanuts, hazelnuts, coconut and coffee to make an irresistible spread. Two jars needed in the house at all times, just in case you run out.
harrysnutbutter.com 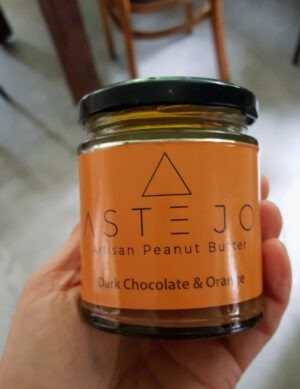 Irish Black Butter Peanut Spread
A wildcard here that comes from Portrush via the orchards of County Armagh. for something very unique. Alastair Bell combines his multi-award winning apple-based black butter conserve, which is like an Irish version of membrillo, with peanuts for a spread that’s sweet, rich and quite unlike anything else that you’re going to taste.
www.irishblackbutter.com 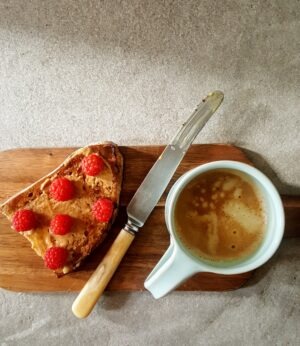 Nutshed
All kinds of peanut butter and nut-based treats from the Ward sisters in Co Tipperary. Their fresh peanut butters come in five varieties: original smooth, crunchy honey roasted, very crunchy, chocolate and harissa chilli – my go-to as a base for a quick noodle dish, as a dip for raw carrots or in a classic cheese toastie. They also funnel some of that nut butter into raw treats like peanut caramel squares and nutty energy balls.
nutshed.ie

Totally Nutz Butter
Katie Gorman set up Galway’s Totally Nutz Butter in 2017 and sells her smooth and crunchy peanut and almond butters in large tubs that you can buy singly or in a selection pack.
totallynutzbutter.com