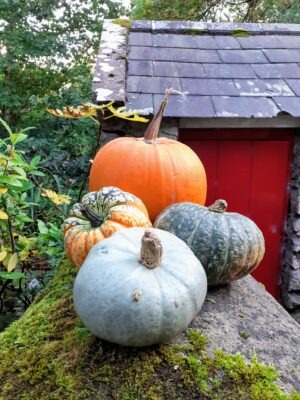 First published in the Irish Examiner on 30 September 2021.

It’s the season of mist, mellow fruitfulness – and pumpkins. Whether they’re piled high in supermarkets or corralled in a huge wooden box at Mitchelstown’s weekly market, pumpkins have become an ubiquitous part of the autumn experience. But it wasn’t always so. Growing up in the 80s, our jack o’ lanterns were carved out of turnips (or potatoes, when my mother refused to hand over that night’s veg), very much in keeping with the ancient Irish festival of Samhain.

Long before I started wrestling with a turnip for Halloween, Irish immigrants had taken the old tradition of carving scary faces into vegetables with them to America, discovering there that pumpkins were far easier to work with. But it wasn’t until the 1990s that the large, orange monsters started to make inroads into Irish homes, although – at that stage – perhaps not into our kitchens.

We didn’t realise what we were missing out on. Pumpkin’s bright colour is a signal that it is high in beta-carotene, a powerful antioxidant that turns into vitamin A in the body, and it also includes vitamin C , minerals like potassium, and fibre. As well as being rich in nutrients, pumpkins can be boiled, steamed, roasted (my favourite), puréed, stuffed, spiced or sweetened – and, most importantly, it tastes great. Enormously versatile in the kitchen, pumpkin’s mellow flavour works in many recipes. 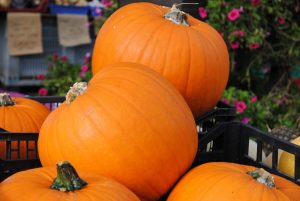 Pumpkin or squash?
There’s a fine line between pumpkins and squash. Pumpkins are, basically, hard-skinned winter squash, all of which are classified as belonging to the Cucurbita genus.

“There’s a never-ending debate about whether our favourite variety, Crown Prince, is a squash or a pumpkin, says Michael Kelly of GIY Ireland. “But either way it’s brilliant – delicious, sweet flesh and a ghostly blue skin. We also like the variety Rouge Vif d’Tampes, a giant rather squat looking orange pumpkin.

“We generally grow a few of the monster pumpkins, they are like a small car when they are fully grown – but they are purely for show and not very tasty.”

And don’t forget, adds Kelly “the whole fruit is edible once cooked – skin, seeds and flesh”. 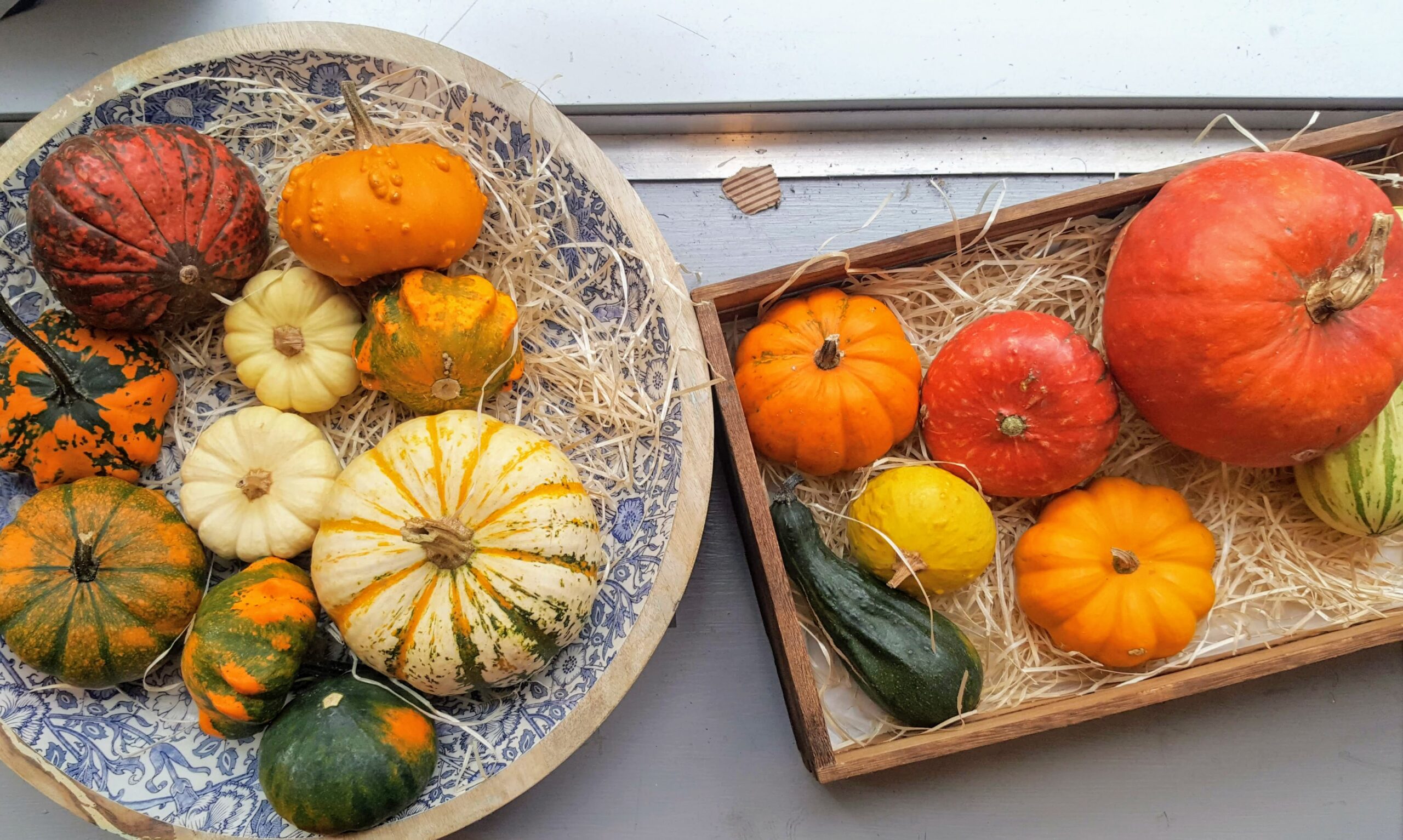 In the US, pumpkins are omnipresent at this time of the year with supermarkets like Trader Joe’s noted for adding pumpkin to just about everything – pumpkin flavoured cream cheese, waffles and overnight oats, anyone? – while Starbucks has its famous pumpkin spice latte. Commercial products aside, pumpkins can be transformed at home into any number of delicious dishes. Pumpkin makes a great base for gnocchi or lasagne, it can be roasted for salads or stuffed into ravioli, included in a curry, made into soup and baked into bread, or split and stuffed to create a vegetable centerpiece. But don’t just look to America for ideas – pumpkins are also enormously popular in New Zealand and Australia. Kitchen bible The Cook’s Companion (Lantern) from Australian writer Stephanie Alexander has a chapter that demystifies what she calls “an everyday sort of vegetable,” with information on varieties, cooking techniques and recipe ideas. For the many dedicated home growers out there, GIY’s Know-it-Allmanac (GIY Ireland) by Kelly and Muireann Ní Chíobháin is a great resource for sowing, growing and harvesting.

Pumpkins come in lots of different shapes and sizes, with crown pumpkin being the best all rounder for flavour and texture, so it’s worth experimenting to see what ones that you like. For cooking, many varieties are interchangeable. That said, jack o’ lantern-style pumpkins are generally grown for carving rather than eating but that doesn’t mean that we have to disregard the innards. When you’re planning to do Halloween carving, first scoop out the seeds – or the guts of the pumpkin, which is what we tell small people – and remove the stringy bits. Toss the seeds in a little oil, salt and your favourite spices (smoked paprika is particularly good) and roast at 180C for 20-25 minutes or until golden brown. Dig out any accessible pumpkin flesh and use in cooking or baking. 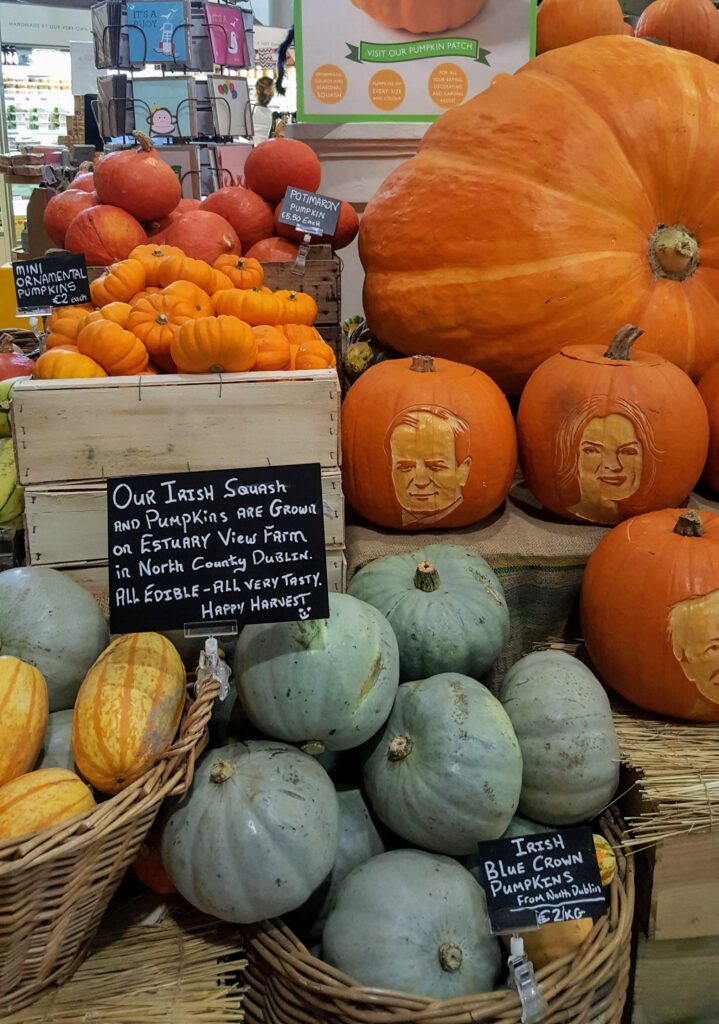 Six spots where you can pick up an Irish pumpkin

How to make pumpkin purée
While it’s easy to find a tin of pumpkin purée in the States, in Ireland, it’s easier to make your own. Preheat oven to 180C. Choose a medium sized pumpkin – not one of the monsters – and cut it, carefully, in half. Remove the pulp and seeds (bake these separately) and brush the cut side with a little oil. Line a baking sheet with greaseproof paper, place the pumpkin cut side down and roast for 45 minutes to 1 hour or until the pumpkin is tender to the point of a knife. Peel off the skin, scoop the flesh into a food processor and pulse until smooth. Freeze purée in 425g bags – the weight of one tin – as that’s the amount most often called for in a recipe. Good to use in pumpkin bread, for baby food, as a filling for ravioli, to make ice cream or in lasagne. 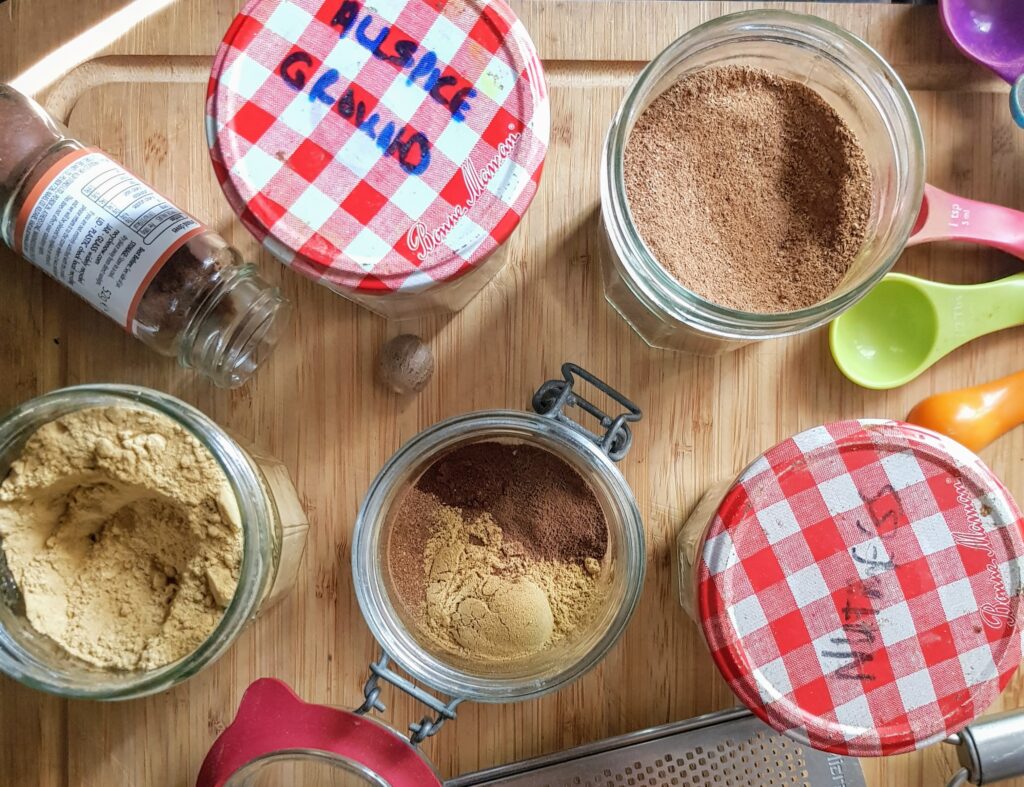 Pumpkin spice
Spoiler alert! No pumpkin is harmed in the making of this spice blend but it is a fantastic combination to have on hand to use when you’re baking.

Measure everything into an airtight jar, put on the lid and shake well. Use with anything pumpkin-related, like muffins, pies, pancakes – and even lattes.