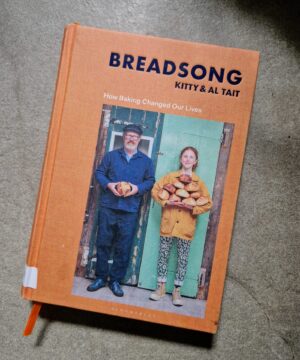 First published in the Irish Examiner on 12 October 2022.

It’s a story of depression and recovery.

It’s a memoir by a daughter and father team.

It’s a book about how baking brought a seriously depressed child back into the world with the hands-on help of her father and the support of her family and community.

Breadsong, evocatively named for the crackling sound made by a freshly cooked loaf as it cools, is written by Kitty and Al Tait, who live in the small market town of Watlington in Oxfordshire. It starts in 2018 when Kitty was just 14: “Looking back, I was very much a people pleaser growing up,” she says. “I was the youngest of three, the very happy, bubbly one, but when I was around 13 or 14 I started to struggle with anxiety and found the school day really really hard. I didn’t want to tell anyone – I didn’t want to worry them – so I just pretended and put on this act and then one day it all just shattered and I couldn’t go through the motions anymore.”

Al documents this time in Breadsong through a parent’s eyes: the acute bewilderment of seeing a bright, chatty child turn into someone who is overcome by despair, the difficulty in trying to simply get through the day, the huge impact on family life. Unable to cope, Kitty left school. “I had nothing to do and the whole family was trying to distract me from what was in my head. Then I made a loaf of bread with my dad and I fell in love with the process. It’s like magic the way those four simple ingredients turn into bread.” That bread was Al’s adaptation of an easy no-knead bread – the miracle overnight white bread that is the first recipe in the book. It’s a bread that’s so good, and so simple, that it does indeed feel miraculous when you pull it out of the oven.

It’s hard to believe that Kitty, now 18, was so depressed as we chat on the phone on a Tuesday morning while she is whirling around the bakery, making focaccia, stirring crème pâtissière and with the mixer kneading croissant dough in the background. Halfway through the call she hops into the car with her dad Al, who joins in on the interview as they travel to the next town, the three of us managing to navigate a chat through coverage black spots.

What was it that appealed so much to Kitty about that first loaf? “It was safe and warm and comforting,” she says. “I started to bake myself and learned everything from books and YouTube” and, eventually, she nerved herself up to visit other bakeries, a difficult, often painful, process that Al describes vividly in Breadsong. “I also started an Instagram account – the bread community is a lovely community, a world outside my own, so that helped with anxiety.” With a new routine to cling to, Kitty was baking obsessively, making more and more bread, at one stage even using neighbours’ ovens. She started giving loaves away, set up a subscription service and weekly pop ups, then opened the Orange Bakery in Watlington, which she and Al crowdfunded. “We had no money – just £200 from pop-ups. We thought that we would never raise enough but we hit the target within 48 hrs. I think Dad’s heart sank,” she remembers. “We opened the bakery just after my 15th birthday. It was eight months from me baking my first loaf to opening a bakery.”

Breadsong charts the journey, both the baking and the corresponding improvements in Kitty’s mental health, but it wasn’t all straighforward: Al, a former teacher, had to leave the world he knew and face the unknown with Kitty who, despite her illness, had a propulsive power behind her when it came to bread. “I’m a bit of a jumper,” she acknowledges, “so I make that jump and Dad makes sure that I don’t fall. I never say this to him,” she confides, “but I do love working with him!”

For Al, becoming a baker was a new calling in life and a side effect of trying to manage a situation – Kitty’s depression – where he and his wife Katie had no clue what to do. He had many misgivings about Kitty leaving education at such a young age but she is adamant that it was the best thing: “I didn’t think twice about it because we didn’t have a choice. First, I wasn’t able to go to school – and then I was running a bakery and couldn’t go to school. I love learning and I’m constantly learning but you don’t have to do all your learning before you’re 18.”

Writing the book for Kitty was, initially, “difficult and scary to go back and then it was very cathartic. We’d recommend it to other people, to rewrite the narrative and remember that there were laughs.” Al agrees: “It’s very easy to almost draw a line under a particular period of time and it’s all the same colour – grey – from start to finish. When you look back you do see a lot of greys, and some black, but a lot of colours as well.”

Now he and Kitty are on a mission to get good bread out into the world and Breadsong, an inspirational book that will appeal to those with depression, the people who care for them and anyone who wants to bake, shows how you can do it for yourself. There are 80 recipes, from simple pittas and their famous marmite-infused comfort loaf to maple, bacon & pecan buns and cauliflower cheese tarts, with instructions for potential bakers of every experience level. Kitty feels that the whole experience of making bread by hand is beneficial on many different levels: if you’re not feeling well mentally, it helps you to “feel better because you’re being productive. You’ve also got the price side. It’s so cheap – it doesn’t cost much to make dough and it’s a really affordable way of entertaining yourself, involving both fun and skill.” Al agrees: “I don’t want to malign white sliced loaf but when you’re making bread, it’s fantastic, the difference in taste. It’s a different species.”

With an understanding of the difference that bread and baking has made to their world – Breadsong’s subtitle is “How baking changed our lives” – the Taits have launched a not-for-profit initiative called Kitty’s Kits. “I want to train up the next generation of bakers,” vows Kitty, who has put together a free breadmaking kit for schools with the aim of teaching children how to make bread. “We want to get as many people baking as possible!”

Kitty and Al Tait will be speaking at Food on the Edge, a two-day symposium on the future of food, which takes place at Airfield Estate, Dundrum in Dublin on Monday 17 and Tuesday 18 October 2022. More information and tickets are available at foodontheedge.ie.

Breadsong: How Baking Changed Our Lives by Kitty and Al Tait is published by Bloomsbury.

Follow Kitty Tait’s adventures in bread at @kittytaitbaker and at https://www.kittyskits.co.uk/

Two favourite bakes from Breadsong
Kitty: The miracle overnight loaf! It’s the first thing that got me into baking and I love it. It’s pure alchemy and magic.
Al: Soda bread, where you can make a loaf in less than an hour without yeast. We have a version with Guinness and black treacle, which is great with soup.