For the term "eggs". 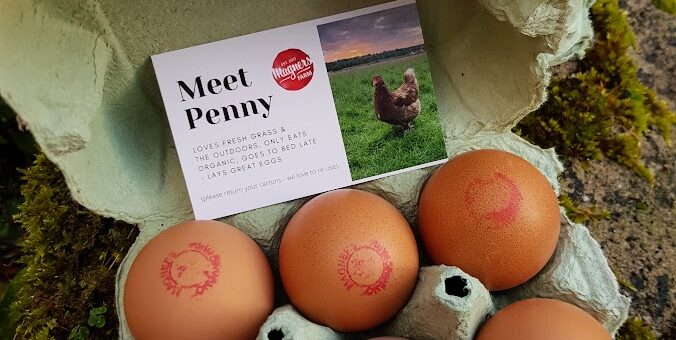 Wrapped up in beautiful, oval, little packages, eggs are the workhorse of the kitchen. But, despite many delicious uses – and the fact that they’re a nutritious powerhouse – they are often undervalued. Kylie Magner of Magner’s Farm in Tipperary is working on changing this.

First published on Irish Country Living. The cheesemakers of Ireland sure do know how to put on a hooley. The cream of the crop gathered on a dark November night at the Grainstore in...

We were at a pre-wedding family get together in New Zealand some years ago, right before one of the Husband’s sisters got married – and I was checking out the buffet table. It was the...

It’s nearly Easter egg time but, with a wide range of dark, complex bars of chocolate now available, why limit yourself to its sweet side? A few years ago I spoke to chocolatier Willie...

A new way with eggs

Mornings have gotten spicier in recent times, not to mention more chocolaty, as I’ve been using some of Carluccio’s hot chilli oil to fry my breakfast egg (ah, maternity leave: time – Little Missy willing – for a full breakfast!) and grating lots of the birthday cacao over. Mouthfuls of intense, savoury yumminess, and plenty of lovely runny egg yoke to mop up with homemade fennel-aniseed-caraway bread.

It’s looking like summer has already arrived in North Cork and the hens, although their numbers were reduced to three of the original four after a run in with a fox during the winter, are thoroughly enjoying the sunshine. No matter what weather we’ve had, they’ve still managed to produce a steady source (especially after I found their secret stash!) of dark yellow-yoked eggs for baking and cooking, as well as being entertaining company in the garden. 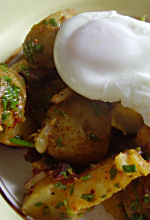 We didn’t have very many new potatoes this year so those that made it into the pot were treated like gold. We planted them, as normal, on 17 March – the traditional time in Ireland for planting the spuds, as far as I know, especially when they’re earlies – but the weather was nasty after that so I think more than a few simply rotted in the ground. Between that, the terrible summer, the death of our cat and subsequent rise in the bunny population (we must not have been eating enough Rabbit Stew) it hasn’t been an entirely successful summer in the garden. At least we’ve the hens to keep us fed and entertained, although when the weather was absolutely appalling there, last month, they seemed to go through a bit of a depression, egg laying dropping to just one per day. Fortunately they’re now back up to a three-a-day average – making a lovely accompaniment to the few potatoes that we managed to salvage.

While we were away in France, we were lucky enough to have my Naas Cousin come to house- and chicken-sit for a few days. Not only did she take extraordinarily good care of the place and livestock, she also left us a gift of the cutest pair of dozy bear eggcups. Boiled eggs will simply never be the same again. Thanks Elaine!