It was a sad day in work today as URRU Mallow closed its doors after just over two years of trading.

The best olive oil in Ireland? 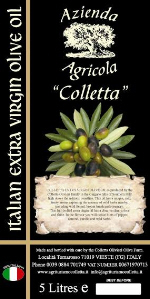 Fruity, peppery, herby…and oh so fresh! The latest batch of Colletta Olivieri Extra Virgin Olive Oil has just arrived and it’s irresistible. It is imported to Ireland by Lino Olivieri, whose family grow the olives down in Puglia, Southern Italy and also run the much-recommended Agriturismo Colletta Antonetta. Lino is the partner of my friend The Connoisseur so I’ve been hearing about his home, those olive trees and that oil for several years now.

Blogging central in The Irish Times

Only got a chance to look at yesterday’s Irish Times today and found Marie-Claire Digby’s article on foodie websites and food bloggers, which mentions some of my favourite Irish sites including greatfood.ie, icecreamireland.com, quirkykitchen.blogspot.com, englishmum.com – and Bibliocook.com!

A Day at elBulli by Ferran Adrià, Juli Soler, and Albert AdriàThe demand for seats at Ferran Adrià’s elBulli restaurant in Northern Spain is such that only a fraction of the people who want to will ever get to eat there. Its pedigree is well known – three stars from Michelin, a chef who is the king of molecular gastronomy, two million requests a season for only 8,000 places, four times named best restaurant in the world.

It’s baking central online at the moment – not yet at the cottage, as I’m still looking for a chance to put a belated batch of sweet mince together for the mince pies of Christmas! – but there are lots of lovely ideas out there for anyone who has a little more time.Dan Lepard’s list of seasonal and just plain helpful tips from the experts about putting mashed potato in your bread dough for a softer crumb, making oatcakes in large quantities, keeping cookie dough in the fridge for quick slicing and baking and making bread dough in advance for better flavour are a great read.

The Good Things Café in Durrus is holding a pre-Christmas Open Day next Sunday, 14 December, from 12 noon to 4pm. Its chef-owner, Carmel Somers, was one of the people that I interviewed for Foodtalk on Newstalk. We spent an afternoon talking about the time she first tasted limes in boarding school, heading off to Paris to work in kitchens there, cooking for Jane Grigson in London and how she uses spices with readily available Irish ingredients like turnip and cabbage.She is paired in the Spices programme with Arun Kapil of Green Saffron, which will be broadcast on Sunday 11 January. The cafe is in a gorgeous location, out on the Sheep’s Head Peninsula in West Cork, so it’s well worth a visit. There’s more information below.