Antique china teacups and linen tablecloths at the ready!My Culture File report on Miss Courtney’s Tearooms and a return to the gentle act of taking tea will be broadcast on Lyric fm 96-99fm this evening at approximately 6.40pm.

There was a rich, savoury smell in the autumn air as a band marched down the crowded streets of Kanturk, leading a white and crimson velvet-gowned troup. The members of the Brotherhood of the Knights of the Black Pudding had travelled from France to pay tribute to the gold medal-winning black pudding of father and son butchers Jack and Tim McCarthy.

These turkeys have legs! After a call from a Newstalk researcher on Friday, I was on the Tom Dunne show yesterday morning, talking about keeping – and harvesting – turkeys for Christmas. 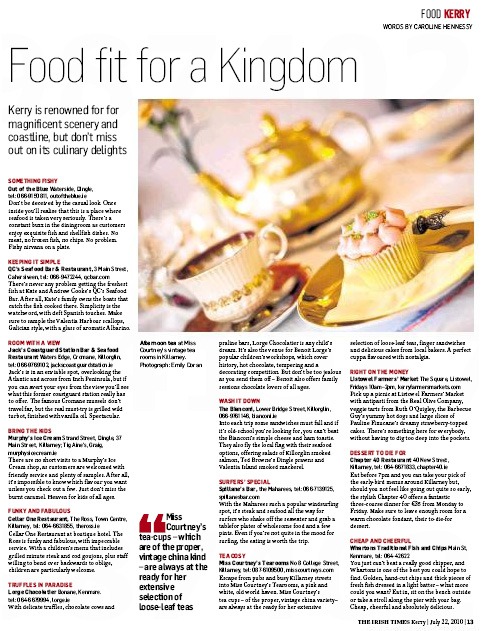 Fancy some food in Kerry? Check out the Failte Kerry supplement in today’s Irish Times. Click on the newspaper below to see it in a larger format. Stirring tagines in Morocco, making fish cakes in Bangkok or buying the ingredients for Chicken with Apples in Normandy, make the most of your holidays by taking a cookery class while abroad. Caroline Hennessy gives some ideas for locations where the recipes you learn will last far longer than a suntan on SilverCircle.ie.