Bibliocook - All About Food Blog 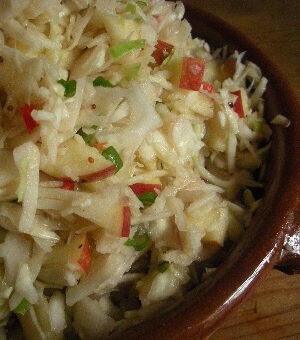 Unless it’s homemade, I’m not a fan of coleslaw. Too much rancid mayo, too few shredded veg, too gloopy by far. When I was in the Cork’s The Woodford recently, I ordered meatballs in a Cork-made blaa for lunch.

The profiles of these 10 Irish bloggers were first published in the Irish Examiner on Saturday 22 January as part of the Welcome to my world feature.

Your daily bread: Sourdough from starter

After our Doodle Bread adventures last weekend, I went on a bit of a bread making buzz. Normally we make our bread in the machine – it’s quick, efficient, makes great bread and, secondhand, it only cost me €10 – but I had forgotten how much I enjoyed the kneading side of things so it was time to dig out my Ballymaloe sourdough starter.

href=”https://www.bibliocook.com/2010/12/christmas-bakin.html”>baking is done, there are jars of homemade mustard sitting on the counter alongside Lemon and Passionfruit Curd and the second turkey is almost ready to go. We’re due to leave the cottage tomorrow, abandoning our iced up windows – it’s just not melting these days, and that’s inside – for a few days of central heating and living with the family at my parents’ place.

Some might say that it is too late for Christmas shopping but, as the Little Brother informed me this morning, there’s loads of time yet. Which would be fine if he wasn’t supposed to be buying for me – my family does Kris Kringle so that you only have to buy for one person – and most of the things I want are online. My fault for not telling him in time, apparently! Oh well…if there are any similarly challenged little brothers out there, they might find this list useful. Here are, in no particular order, a selection of review books that I’ve enjoyed this year. You can also find a few more in the Cooking the Books index.