A Taste of Yellow: Round-Up

If you’re in the mood for yellow food, Barbara over at NZ food blog Winos and Foodies has managed to wade her ever-gracious way through a total of 143 – that’s no typo, I did say 143! – entries for her A Taste Of Yellow foodie event.When I first started blogging, while living in New Zealand in 2005, it wasn’t long before I discovered Winos and Foodies, one of – as far as I know – the first NZ food blogs and I’ve been a fan ever since, admiring Barbara’s ever-inspiring zest for life, food, Donna Hay, baking and blogging, despite her ongoing battle against cancer.

We are nearly through our first apple season at the cottage – the few that have been too small to pick are still grimly clinging on to the tree through November wind and rain, while the fallen ones are being enjoyed by our still-prolific rabbit population and I’ve got a stash for myself upstairs in the spare room.

Here are a few Irish food sites that I’ve been spending time on recently… * Greatfood.ie – I wrote about this site when I first discovered it in April and I’ve been enjoying it...

Things have been a bit mad around here lately so I haven’t unfortunately been able to participate in last two Hay Hay, It’s Donna Day events – and , hosted by Clare at respectively. Due to a traffic accident, Clare hasn’t been able to do the round up so Barbara, the HHIDD instigator, with Bron’s help, has put together a round up of the imaginative cookies that emerged from that challenge at . Barbara also met Ms Hay at the recent and you can read all about that on the same post 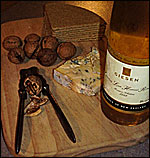