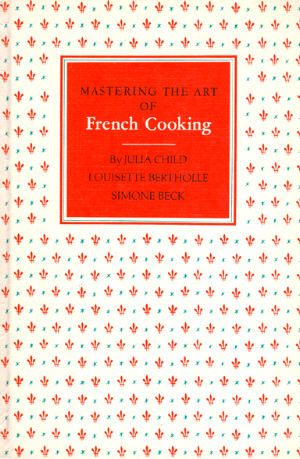 Since the release of Julie and Julia, both the book and the film, Julia Child’s Mastering the Art of French Cooking has taken on a new lease of life. Now when readers look at this classic cookbook – first published in 1961 – they do so with the memory of Julie Powell’s consternation while tackling recipes like Boeuf Bourguignonne and Homard a l’Americaine. And they hear Julia Child’s idiosyncratic voice (and Meryl Streep’s take on that voice) in every line of this opinionated, entertaining and educational book.

But this is no quickly churned out film tie-in. The recipes here, all 1,000 of them, are the product of years of translation, cooking and testing by Les Trois Gourmandes – Child, with her cooking school companions Simone Beck, and Louisette Bertholle. But it is the gentle humour of Child that shines through in the text.

The book shows its age in two areas: infrequent illustrations take the place of the photo-per-page in today’s cookbooks and the recipes are written in a style that alternates ingredients and method. That said, this is a great cookbook for anyone – and that should be anyone interested in food – who wants to learn about French cooking.

Child points out that none of the ingredients are inaccessible and that the title of the book could easily be “French Cooking from the Supermarket”. It is worth remarking, though, that her supermarkets seem to stock useful things like tinned foie gras, lobsters and tinned truffles. More importantly, she places great emphasis on acquiring skills and technique, points out that it is important not to skimp on butter, cream – or time – but the main thing that she wants to impart is the joy of cooking.

In short, Mastering the Art of French Cooking is a treasure and one that is as relevent now as it was almost 50 years ago.

Mastering the Art of French Cooking is published by Penguin Books. Thanks to the publisher for the review copy.