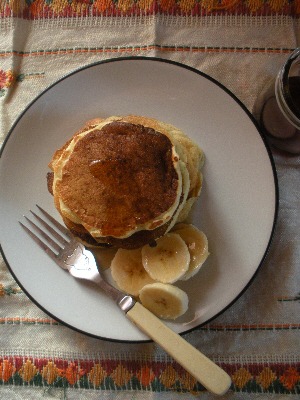 Pancakes, in their purest form (100g plain flour, a pinch of salt, 1 egg, 250ml milk and a dribble of melted butter all whisked together), are one of the easiest things that you can cook.

I’ve never been one to resist a pancake opportunity so Little Missy and I have been slaving over a hot stove all week, flipping our way through different pancake options with alacrity. After trying out some chocolate and oatmeal variations, we’ve come back to our brunch favourite: the thick, fluffy buttermilk pancake.

Buttermilk Pancakes
These were originally inspired by the ones on Bakingsheet but have changed a lot over the years! I served this variation with some bananas and maple syrup but they’re equally good (or maybe even better) with some crispy streaky bacon. And, if you can get your hands on some of the fabulous Highbank Orchard Syrup, pour rather than drizzle.

Whisk the flour, bicarbonate of soda, baking power, sugar and salt in a large bowl. Mix the buttermilk, egg and vanilla together in a jug. Whisk the liquid ingredients slowly into the dry ingredients until thoroughly combined, then stir in the melted butter.

Add about a tablespoon of oil or butter to your frying pan. When hot, pour in the batter. I use a soup ladle and cook about three pancakes at a time. Cook for 2-4 minutes, until lightly brown underneath, then turn and fry the other side. Repeat, adding more oil/butter as necessary, until all the batter has been used up.

On this day of So Many Pancakes, here's the greatest recipe ever: https://t.co/3DhGxcShBs – It's never once let me down. Thanks @Bibliocook!