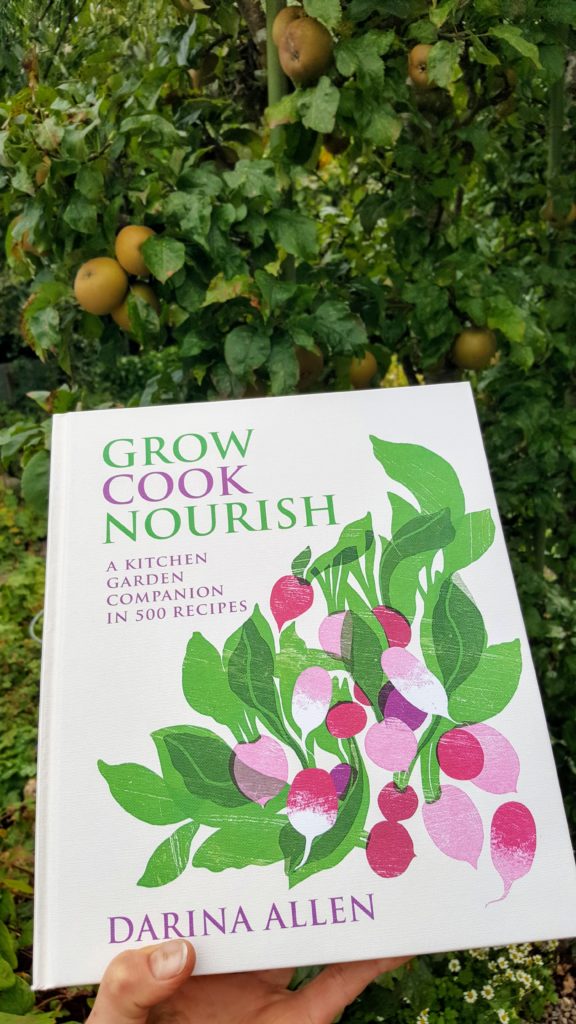 The first hands-on experience I had at Ballymaloe Cookery School was in the garden. Day 1 of the 12-week course, fresh from nervously juggling cups of coffee and introductions, we were ushered into the orchard and Darina Allen led us off on a whistle-stop tour of the extensive gardens and organic farm. We crowded around to nibble sorrel in the Herb Garden, met the chickens that eat much of the kitchen waste, the compost heaps that take their leftovers, zipped down to the glasshouses to taste sweet, warm tomatoes and each of us planted a lettuce seedling.

That farm to fork engagement – growing and harvesting and cooking and eating – was why I ended up studying at the Ballymaloe Cookery School. I wanted to learn about food from the ground up. Ten years on, I still love returning to the gardens where I spent bleak November mornings armed with pruning shears or golden autumn days picking vegetables for the cooking day ahead.

Inspired by Ballymaloe, I’ve built my own raised beds to grow vegetables, kept chickens and – once! – turkeys. The half acre behind the cottage is planted with fruit and nut trees, raspberry canes gone wild and a feral gathering of Jerusalem artichokes who crowd close to the compost patch.

With Darina’s latest book, Grow, Cook, Nourish, I’ve even more inspiration. It’s a sizable tome, its 640 pages weighing in at 2.25kg, and there’s lots of information to dive into. Thinking of growing agretti, an Italian grassy-looking vegetable that is a relation of spinach? Darina has details of varieties, how to grow, when to harvest and recipes for using it. More unusual garden produce – amaranth, barberries, chickpeas – sit comfortably alongside gardeners’ favourites like carrots, courgettes and tomatoes, offering something for novices as well as those looking for new ideas.

There are chapters on vegetables, fruit, herbs, wild & foraged plants and edible flowers but, unfortunately, no index at the start. As the plants are arranged alphabetically according to their Latin names, it’s not the easiest book to navigate. That said, once you find your way around, there’s a wealth of useful information that’s specific to the soil and weather that Irish gardeners encounter.

The 500 recipes are gathered, magpie-like, from Darina’s travels around the world – Roast Cauliflower, Freekeh, Pistchio & Pomegranate from San Francisco, Transylvanian pancakes with ricotta and dill – her friends (Camilla Plum’s Roast Chicken with Bay Salt and Bay Leaves), past students (Lamb Breast with Gremolata, Celeriac & Potato Pureé from Jared Batson of Chicago’s Nomad) and true classics from the Ballymaloe archives, like Bramley Apple Snow. It’s an eclectic collection and one that will have you heading to the kitchen.

Satisfyingly, I found a crunchy, raw winter salad to deal with those Jerusalem artichokes (Jerusalem artichokes with smoked almonds and preserved lemons on p169). It’s a great reason to get digging in the garden, while dreaming of next year’s growing and cooking and eating. 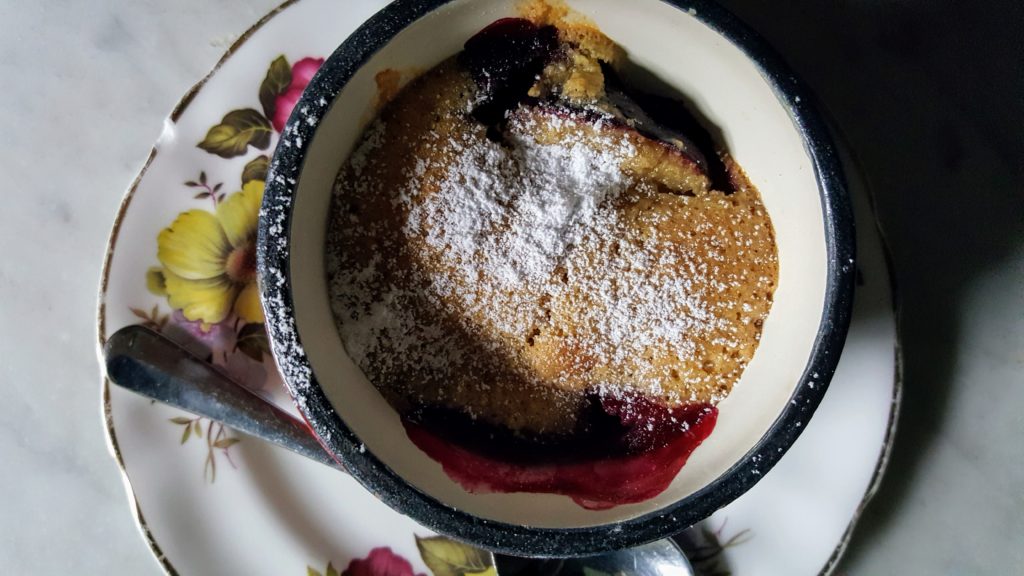 Plum and Almond Puddings
Since my mother was diagnosed with coeliac disease this year, I’ve been working with lots of different recipes to make them gluten free. Adding ground almonds is often the easy – and delicious – option! For this, adapted from Darina’s Blood Plum Puds recipe, I replaced the 50g of flour with almonds, with great success. It’s a simple pudding that we’re planning on trying with other fruit. Serves 6.

Preheat the oven to 200C. Butter the insides of six 250ml ovenproof pudding bowls or cups

In a food processor, whizz the butter and caster sugar until combined. Add the eggs, almonds and vanilla and blend until mixed together. This can also be done with a hand mixer.

Put two halves of a plum into each of the bowls. Divide the almond mixture evenly between them. Bake in the preheated oven for 15-20 minutes, or until the mixture is golden brown and cooked through – test with a skewer to check that there is no raw batter in the center.

Sprinkle with a little icing sugar and serve with whipped cream (Darina’s suggestion), ice cream (as chosen by Little Missy) or natural yoghurt (my favourite).