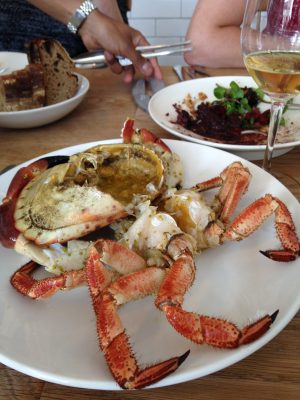 I have two sisters.

(And two brothers, but we’re focusing on the girls here.)

The Little Sister is five years younger than me; I’m 16 years older than the Small Sister. They would probably like it pointed out that they’re both taller than me.

The Small Sister spent last summer working in Austria, after four years in Melbourne. We decided London would be the ideal location for a Summertime Sisters’ Summit, aka ThreeSistersEating, a coffee-beer-sherry-wine-food-fuelled tour of the city.

There was also a LOT of walking. Probably just as well.

Armed with recommendations from Adam of The Gannet and Patrick of GastroGays fame, we came with a list, a map and an appetite. And a couple of invaluable reservations.

Favourite spots: St John’s Bread and Wine for breakfast (kidneys!), Lyle’s for lunch (fresh peas and Ticklemore cheese, a whole brown crab) and Nopi for dinner (courgette manouri fritters + a glass of fino). Coffee quality was high across the board but my absolute favourite spot was Kiwi transplant Ozone in Shoreditch.

We stayed in Vauxhall’s Student Haus, found via Booking.com  which worked out at something like £28 per double room per night, for clean and central bedsit-style rooms, which came with an ensuite, study desk and fridge / cooker.

Two nights + the most of three days meant that we had enough time for plenty of sister slagging and Pokémon Go-ing (the Small Sister) and even a bit of culture at the Tate Modern, alongside all the eating and drinking. Despite occasional lack-of-caffeine-induced rattiness (all of us), we had a ball.  Go eat London.