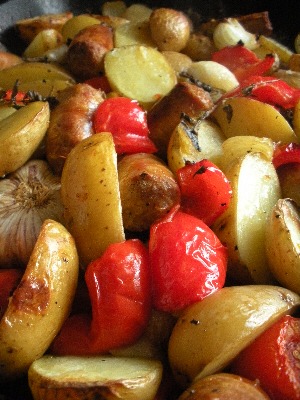 No matter what the weather – even if it’s a grey and gloomy July day  – you can’t go wrong with a dinner that you toss together, plonk into a couple of large baking tins and land into the oven. When it uses some of Ed Hick‘s superb fat, meaty sausages, all the better. I was a fan of these back in my Dublin days when I could easily pick up a pack or two at the market in Temple Bar so I took full advantage of Ed’s sausage-sitting service at Bloom in order to bring home four packs to stock up the freezer (along with some bacon jam, of course – but that’s another story!).

With two sisters calling round for an impromptu meal and a cranky Little Missy on hand, this Sausage and Potato Bake was nice and easy. Once it went into the oven, myself and LM could head outdoors for some quality garden time in between showers; I just needed to glance into the oven every so often to shake the tins and make sure that nothing was carbonising.

At dinner time, LM dived into her serving, demanding more and more of the baby potatoes which had been nicely soaked in the juices of the sausages, peppers and tomatoes. The Student Sister, who has a habit of looking at my dinners with great suspicion (it might be a hang-over from the Rabbit Stew days), even ate a plate with every appearance of enjoyment. The only problem was trying to keep some back so that the Husband wouldn’t come home to a cleared table…

Sausage and Potato Bake
Because Ed Hick’s sausages are so chunky – I used the wine and garlic ones – they’re perfect with this. If you can only put your hands on a more, shall we say, delicate sausage, you might be better off adding them in to the oven about 30 minutes into the cooking time.

Put the sausages, potatoes, peppers, onions, tomatoes, garlic and thyme into a large bowl. Pour over a couple of tablespoons of olive oil, season and toss until all is well mixed.

Divide the ingredients between two large roasting tins and bake for 1 hour. Check occasionally to make sure that nothing is burning and tossing and give everything a good stir.

Serve with a simple green salad – use plenty of lemon juice in the dressing.